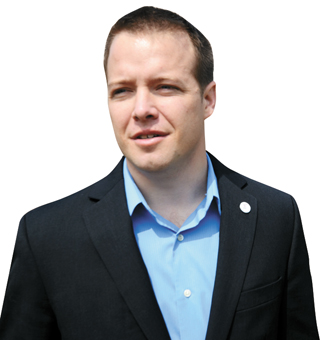 Bringing people face to face is the only way to build trust, according to Michael Lammbrau, the head of the Arirang Institute in Seoul, a nonprofit organization aimed at drawing international attention to the purpose of uniting the two Koreas.

“If we can build trust, then we can have hope for a prosperous and peaceful future,” the German-American said Wednesday in an interview with the JoongAng Ilbo.

The institute, launched in February and based in the U.S. state of Virginia, aims to “strengthen ties in East Asia through people-to-people diplomacy.”

Lammbrau, a doctoral candidate at the University of North Korean Studies, said he developed an interest in North Korean affairs after he served as a soldier in the U.S. Forces Korea from 2008 to 2010 in Seoul and Pyeongtaek, Gyeonggi.

“My interest in Korea started with my grandfather’s participation in the Korean War,” he said. “So I naturally became interested in North Korean affairs and the unification of the two Koreas and launched the institute, as there would be some roles that a third party could play for it. So I joined the Army out of that sense of duty.”

Although the headquarters of the Arirang Institute is in Virginia, Lammbrau said its members interact with others through social media websites like Facebook and Twitter and hold meetings in Seoul.

In February, the institute held its first seminar in Seoul titled “North Korea: A debate on engagement strategy,” and on Tuesday, a string of high-profile officials joined a panel discussion at another conference hosted by the institute titled “Korean Reunification: A Discussion and Security Implication,” at the University of North Korean Studies.

Lammbrau said the institute hosts a variety of cultural and sporting events, not just seminars. In May, they are planning to form a football team made up of North Korean defectors and participate in the annual Ulsan Cup, held in Ulsan, North Gyeongsang.

Later this year, the institute is also preparing for the Arirang Trail, along with the Han River Riders, a society of foreign cyclists.

Two teams of cyclists will ride through two separate courses, from Yeoncheon County, Gyeonggi, to Mungyeong, North Gyeongsang, and from Busan to Mungyeong, over two nights and three days.

During their journey, they will ask people what their hopes and dreams are for the peninsula, Lammbrau said, in order to make a documentary on that subject in Mungyeong.

“The human network we build together could be hope for the unification of the two Koreas,” Lammbrau added.