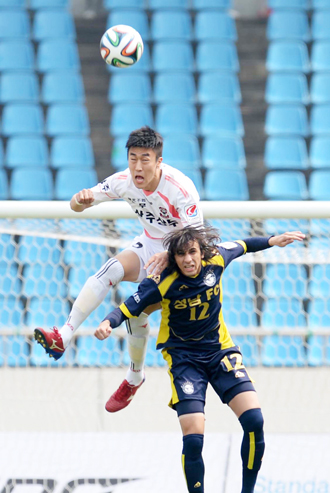 Choi Ho-jung of the Sangju Sangmu Phoenix, left, and Jorge Valdivia of the Seongnam FC challenge for the ball during Round 8 of the K-League Classic yesterday at the Tancheon Sports Complex in Seongnam, southern Gyeonggi. [NEWSIS]

SEONGNAM, GYEONGGI — Seongnam FC drew 0-0 against the Sangju Sangmu Phoenix after having a tough time in creating opportunities to score.
In Round 8 of the K-League Classic at Tancheon Sports Complex in Seongnam, southern Gyeonggi, Coach Park Jong-hwan of Seongnam FC started the game with a 4-4-2 formation, putting forwards Hwang Eui-jo and Brazilian Jorge Valdivia on top of the offense while midfielders Kim Tae-hwan, Kim Cheol-ho, Lee Jong-won and Lee Chang-hoon backed them up.
The Sangju Sangmu Phoenix, led by Coach Park Hang-seo, also started the match with a 4-4-2 formation, putting forwards Lee Keun-ho and Ha Tae-kyun at the top of the offense line. But the two teams’ midfielders could not manage the game’s tempo or deliver accurate passes to attackers, allowing very few chances to score.
In the beginning of the match, forward Hwang of Seongnam FC blasted the first shot of the match from the left corner of the penalty box, but the shot was blocked by Sangmu’s goalkeeper Kim Min-sik. Another shot by Hwang in the 43rd minute from the left corner of the penalty box was also not accurate, bouncing off the bottom right of the goal post.
Passes headed for Brazilian Valdivia were intercepted by Sangmu defenders, and he found it difficult to keep control of the ball as he was often challenged by more than two players every time he was in possession.
Coach Park of Seongnam FC replaced the Brazilian with Kim Dong-seob before the second half began, but it didn’t pay off.
“Things didn’t work out,” Park said in a post-match interview. “This was the type of match in which we should have earned three points, but we failed because we couldn’t score a goal in chances.”
On Saturday, the Jeonbuk Hyundai Motors, led by Coach Choi Kang-hee, which struggled in their past two league matches with a loss and a draw, overpowered league leader Ulsan Hyundai Tigers. By earning three points, the Motors jumped to second place with a record of four wins, two loses and two draws (14 points), and also maintained their eight-game winning streak against the Tigers at home. The Tigers fell to third place after the match (13 points).
In the match, held at Jeonju World Cup Stadium, the Motors maintained their 1-0 lead with a penalty shot by veteran striker Lee Dong-gook in the 15th minute.
Coach Choi previously said he was finding it difficult to organize his lineup, as the team had to play four matches in the past 10 days, including K-League and Asia Football Champions League matches.
“I only focused on earning three points today,” Coach Choi said in a post-match interview. “I tried not to think about the AFC match that we will have on April 15.”
In their past two matches against FC Seoul on April 6, the Motors only earned one point over a 1-1- draw and lost to Jeju United 0-2 on April 9.
“I think I worried about too many things. In the match against Seoul, I worried about the match with Jeju and the same types of worries impacted the Jeju match,” Choi recalled. “It actually didn’t help the team at all.
“It was a precious win for us, but I worry about our players getting tired under this tight schedule. One good thing is that we were able to change our mood before the AFC match against the Yokohama F. Marinos next week.”
Defending champions Pohang Steelers put themselves on top of the league for the first time in the season by beating Jeju United 3-0, adding to their six-game unbeaten streak (five wins and a draw).
Midfielder Kim Jae-sung scored two goals for the team in the first half, one in the 24th minute and the other in the 35th minute. Forward Kim Seung-dae scored the team’s third goal in the 78th minute. Midfielder Lee Myung-joo controlled the team’s game in midfield to help the club dominate the match.