Executive sees BASF and Korea as an ideal match

Executive sees BASF and Korea as an ideal match 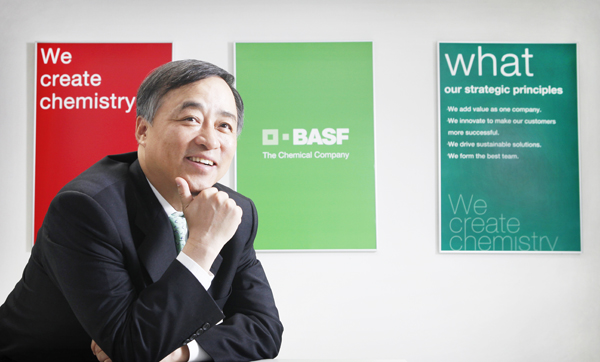 BASF Korea Managing Director Shin Woo-sung at his office at the KCCI building in central Seoul. By Park Sang-moon

When people realize the size of the investment and presence of BASF - the world’s largest chemical company - in Korea, most of them are surprised.

The importance of the Korean unit is becoming stronger. BASF’s new Electronic Materials Research and Development Center Asia Pacific is in Sungkyunkwan University’s Suwon campus, and the company’s first manufacturing plant for Ultrason, an amorphous thermoplastic, outside Germany is in Yeosu.

BASF’s executive overseeing all these operations is 57-year-old Shin Woo-sung, who wants to see an even greater BASF presence in the country in the near future.

The BASF senior vice president is not biased when he says his home country is an ideal place for the materials business, citing its high-quality electronics, automobile industry and skilled labor force.

In an interview with the Korea JoongAng Daily, Shin, who studied industrial chemistry at Seoul National University, laments the fact that most talented students who study science or engineering are eager to go to medical school or into the IT industry. However, he believes the importance and power of chemical technology will only grow as it is applied to nearly every product we use. 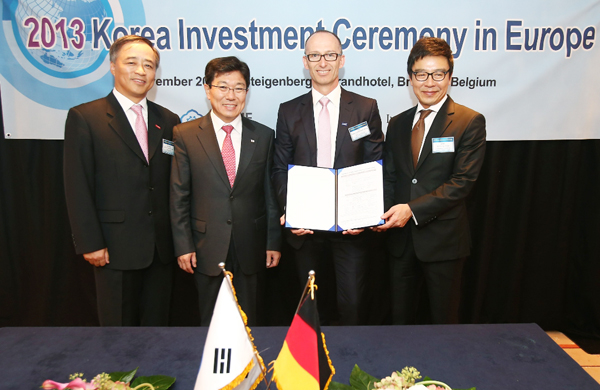 From left: Shin Woo-sung with Minister of Trade, Industry and Energy Yoon Sang-jick, BASF President Peter Schuhmacher and Han Ki-won of Kotra celebrate an agreement last November in Brussels to build a new R&D center for the Asia-Pacific region in Korea. Provided by the company

Q. How do you rate BASF Korea’s performance last year, and what do you expect for this year?

A. BASF Korea had sales of 1.5 trillion won ($1.5 billion) last year, which is about 2 percent growth compared to the previous year, but this is little short of our original goal as the local economy was difficult. Our strategy is to grow at least 2 percent more than the market. As a company in the materials industry, industries that in the forefront compared to us need to do well in order for us to grow. Many experts say this year’s economy is not that different from last year, but I see slow growth for this year.

BASF has been building plants and R&D centers in Korea. Why is it investing so much here?

BASF’s business is closely tied with Korea’s main industries. For instance, as companies like Samsung, LG and Hyundai Motor grow and develop, we also need to develop to provide the right materials. Since these companies’ headquarters are in Korea, we can react fast and catch business opportunities quickly. Our investment is not only aimed at business opportunities in Korea but also at being a global production base as Korea has operational excellence. This is for specialty chemical production, not for commodity chemicals. For instance, the Ultrason plastic plant was established for the Asian market.

Many companies are investing in China, and some worry this might weaken foreign investment in Korea. What about BASF?

BASF already invests a lot in China as half of sales in Asia are there. But China is geared toward commodity chemicals, which require massive production and abundant material sources. However, in terms of specialty chemicals, I think China is not yet ready because of problems involving intellectual property rights and strict regulations for plant construction. As such plants are more difficult and complicated to run, Korea has the advantage with its impressive skill set. The group knows that for running a complicated plant, Korea is a well-prepared place.

Korean workers are renowned for their good technique, and at the same time they are recognized for their level of concentration and company devotion. Some people criticize Korean workers as only hardworking, but I think we also work smart. Our office employees have flexible work hours and no one stays at the office when there is no work. In addition, a third of our employees in Korea are women. There’s a reason why we received a male-female equal employment award.

What is BASF Korea’s future concentration?

BASF’s business is based on the three key areas - resources, environment and climate; food and nutrition; and quality of life - so it’s difficult to pick one field as a concentration. For BASF Korea, electronic material is obviously key business for us because of key companies is in Korea, but that doesn’t mean we are only concentrating on that field. Automobiles, heating materials for construction, wind energy and water treatment are also key areas for BASF Korea.

From left: BASF Korea’s Ultrason thermoplastic manufacturing plant in Yeosu, South Jeolla, completed in January, is the first Ultrason plant outside of Germany; BASF Korea has hosted its Kids’ Lab since 2003 to introduce chemistry in a fun way for elementary-school children; and BASF’s “We create chemistry” world tour stopped at Kintex in Ilsan, Gyeonggi, last May to introduce innovative products to the Korean public. Provided by the company

How do you see competition in the Korean market?

This market has always been competitive, and it’s going to be fierce in the future. For local companies, their real concern will be competition with the Chinese who are aggressively coming into the market with low prices. I think, ultimately, all chemical businesses will have to go for materials. These days, companies are offering total solutions for customers. BASF also has been moving this way. In the end, all industry starts from materials.

Many Korean companies are now trying to boost their material and chemical business. Do you see this as a threat?

Many local companies have been trying to benchmark BASF because we are the global leader. In its 150-year-old history, BASF has had excellent management of its business portfolio. In 1865, we first made chemical dyes, then in 1900s we made fertilizer, but they are not in our portfolios. We have been moving forward to provide high value and market attractive products. But I think local companies have not been at this phase. Unlike BASF, they stick into their past products and upgrade them. Although they are now moving into specialty chemicals, I think they are still a little behind. Korean companies have been moving upstream, coming down from the final product to parts and then materials. But main chemicals behind those materials are still bought from others. Despite their short history and experience in R&D, I believe Korean companies should move from bottom to top.

How is BASF Korea’s relationship with other chemical companies in Korea?

They are eager to work with us as we have the technology and materials. They don’t discriminate and aren’t cautious about us, and we are not afraid to work with them. In fact, one industry officials praised us by after seeing our TV commercial, saying it promotes the interests of the chemical industry in general. BASF doesn’t want to compete with customers, but there has naturally been some competition as many companies try to develop materials on their own and put efforts into chemicals. But as I said, BASF has a long history of developing chemicals and materials and will always be ready to provide the right products to customers.

Generally, chemical companies have negative public images when dealing with the environment. How does BASF manage this?

Whenever I listen to concerns about the environment, I recommend that people to go our headquarters in Germany. It’s right next to Rhine River and near a residential area. Many would think how can a chemical company build a plant in that location, but that’s because the company has ensured a clean environment. I think tightening environmental regulations in Korea would serve as an opportunity for us.

We also communicate actively with local communities. For more than 10 years, every quarter, we have run a community advisory panel comprised of various people and listen to them about our plant operation in Yeosu. But they have actually praised us for doing well. In fact, the audit from BASF headquarters is actually more thorough than the government. If we fail the audit, we might have to shut down the plant. Therefore, we don’t have deep worries about environment problems from our plant, although we are always careful. Nowadays, many people visit our plant to see how it runs in terms of environmental issues.

What do you think about recruitment in the chemical industry? Nowadays, many students in engineering go for IT or automobiles.

The chemical industry is a little conservative compared to other industries, and I think this is because we emphasize safety. One small accident can have enormous consequences. But many talented students now prefer to go medical school. Engineers have been important part of leading these chemical companies, but now I have concerns whether this situation can continue in the future because new engineers don’t want to work in areas outside Seoul. 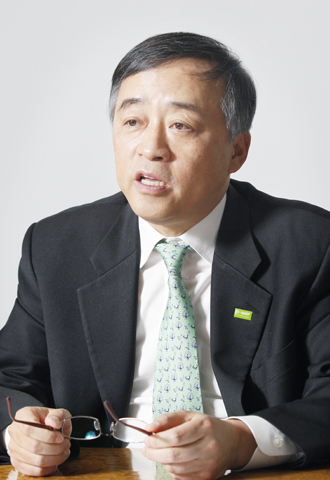