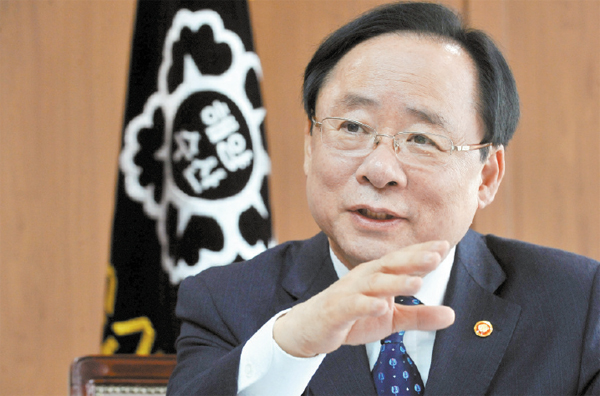 Lee Ju-young, minister of oceans and fisheries, says he is eager to reduce the number of his agency’s regulations to help foster economic growth. By Kim Seong-tae

The Ministry of Oceans and Fisheries handles 1,491 regulations, 9.7 percent of all the Korean government’s total of 15,305 regulations.

President Park Geun-hye believes deregulation is a way to accelerate economic growth, and the government has rolled out a plan to cut the number of regulations by 20 percent by 2017.

The JoongAng Ilbo interviewed Oceans and Fisheries Minister Lee Ju-young, who took office a month ago, on Thursday at his office in Sejong Government Complex. It was his first interview with a daily newspaper since succeeding Yoon Jin-sook, who was removed as minister because of unsympathetic remarks she made regarding an oil spill at the end of January.

Lee brought up the deregulation issue as soon as the interview began.

“No individual or company should refrain from investing in Korea due to tight regulations. I will take proactive movements to remove any regulations that may hinder economic invigoration,” Lee said.

“At the same time, there are some regulations around which the public consensus has been formed in terms of necessity. So we will carefully sort the necessities out while taking axes only on those unreasonable ones.”

Q. The government took out the deregulation as part of the solution to achieving 4 percent economic growth, but those stakeholders who so far have struggled from regulations in the oceans and fisheries areas haven’t really been highlighted much. How much are you aware of their difficulties?

A. Topics about our [oceans and fisheries] areas have been brought up at the open discussion presided over by President Park late last month to root out red tape regulations. An Incheon-based shipping and logistics company requested a relaxation of regulations to allow more manufacturing companies to move into the port hinterlands, sites behind the port. Current regulation mainly aims at supporting shipping companies, not manufacturers, that want to build factories right near the port. It benefits the shipping industry, but at the same time it could be a regulation to the manufacturers. I think such regulations should be removed, because if the factories are permitted to be built near the port, the manufacturers will save transport costs, which eventually could help the companies nurture competitiveness.

Do you have a specific plan about any regions where the ministry will lift regulations?

We are considering Busan, Incheon and the Gapo Port in Masan, South Gyeongsang. Newly built ports and those expected to start operating will be the main areas that will be under the influence of deregulation.

Some contend that the government is driving the public sentiment toward the notion that all regulations are bad. There must be some regulations that are of the utmost necessity.

Our area deals with the oceans, so regulations to protect the marine environment are needed. Safety regulations involving sailors and passengers should also be kept, because oceans can be wild with winds and waves. Fishing limitations are another kind of regulation that should be kept, as excessive fishing may result in the depletion of marine resources, of which I believe the overall public sentiment has been formed about their necessity. In addition, small independent business people in shipping and passenger ship industries need protection. When a regulation is concluded to have adverse effects in attracting investments, even after considering all these exceptions, the ministry will get rid of it.

Marine tourism is receiving attention nowadays. Do you have any plans to support this area or to eliminate any regulations that could hinder the industry’s growth?

We should put more efforts into promoting cruise tourism and marinas specifically used for yachts and smaller pleasure boats. The domestic population of yacht lovers keeps on rising, as well as the numbers of foreigners who visit Korea by sailing on a yacht. However, the problem arises that there is nowhere to pull it in. Another problem arises when the yacht tourists need to report to the Korean government, in particular when it comes to immigration and customs system.

I will do my best in pushing the National Assembly to pass the Marina Promotion Support Act in a bid to solve these problems. The act already passed the standing committee, so I hope to see it passed in April.

“Someone whose hobby is to sail on yachts is wealthy.” Still, this is a widespread public perception, which leads them to criticize policies to support this industry as benefiting the rich. As much as the Korean economy has advanced to the level of other advanced nations, I think such perceptions should also change.

How is the Oceans Ministry going to nurture the cruise industry? The bill to permit the on-board casinos hasn’t been passed by the National Assembly.

About 790,000 foreigners visited Korea on cruisers last year, triple the 280,000 cruise tourists in 2012. This growth in number has given hope to the local shipping industry, suggesting that it will be able to overcome current difficulties through promoting the cruise industry. I think it’s my job to put forth efforts to pass the Cruise Industry Support Act, which would support this hope. In a bid to attract more shippers and manufacturers, the ministry unveiled a port hinterland management support plan last month to expand sites allocated to the two industries in an expectation to boost size of transportation by 14 percent this year and attract foreign investment of about 129 billion won ($124 million) during the same period.