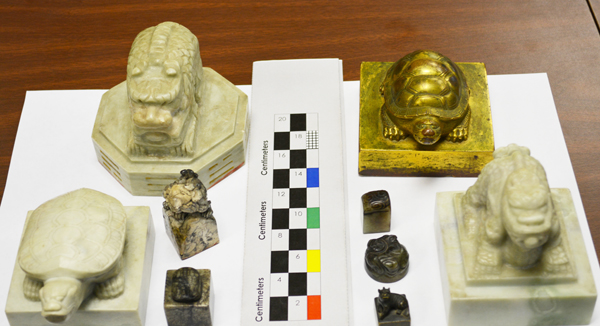 Seals that were smuggled out of Korea during the 1950-53 Korean War will be returned when U.S. President Barack Obama visits on April 25 and 26. [NEWS1]

The United States is preparing to return nine Korean court seals that were taken out of the country during the 1950-53 Korean War and President Barack Obama may be bringing them home when he lands in Korea this month, the Blue House said yesterday.

“With U.S. President Obama visiting Seoul, Korea and the United States have been closely collaborating thus far with the goal of the United States returning nine ancient Korean seals,” said Min Kyung-wook, a Blue House spokesman, yesterday in a briefing.

“We will make an announcement as soon as related details are confirmed.”

The Blue House also officially confirmed April 25 to 26 as the dates of Obama’s trip to Seoul, although they were already made known through diplomatic sources.

The seals, stamps used to authorize documents in lieu of signatures, are from the Joseon Dynasty (1392-1910) and the Korean Empire (1897-1910), sometimes called the Daehan Empire, referring to the final years of the Joseon Dynasty when the country declared itself an empire in an attempt to defend its sovereignty from neighboring countries.

There are currently 11 Korean treasures that Seoul is trying to reclaim from the United States. They are: two guksae, or state seals, from the Korean Empire; seven guksae used in the Joseon Dynasty for various purposes; and two eobo, or royal stamps, each used by a king and a queen during the same era. A notable treasure is the Hwangjejibo, which King Gojong, the 26th king of the Joseon Dynasty, ordered to be made after he declared the founding of the empire in 1897 as a symbol of national sovereignty.

Nine seals, including the Hwangjejibo, were shipped out of the country by a U.S. Marine lieutenant during the Korean War, who said he found them in a ditch near Deoksu Palace in Seoul in 1950 after it was ransacked by Chinese and North Korean soldiers.

Last November, agents from the U.S. Immigration and Customs Enforcement’s Homeland Security Investigations’ directorate received the seals from the family of the deceased former Marine. Obama is expected to bring those seals back during his two-day trip to Seoul after a three-day state visit to Tokyo.

A different U.S. soldier in the 1950s brought out the royal stamps that belonged to Queen Munjeong (1501-1565) and King Hyeonjong (1641-1674), and both Korean and U.S. authorities began last June to persuade the private collector in Los Angeles, who is now in possession of them, into giving them up. Blue House spokesman Min said getting them back will take time because the owner insists he acquired them legitimately.

Obama’s trip to Seoul will be his fourth since his inauguration as president in 2009. President Park extended an invitation to Obama during their summit last May in Washington. Park and Obama are expected to have an “in-depth” conversation about comprehensive strategic development plans, cooperation on the North Korean nuclear issue and Northeast Asian security, according to the Blue House.