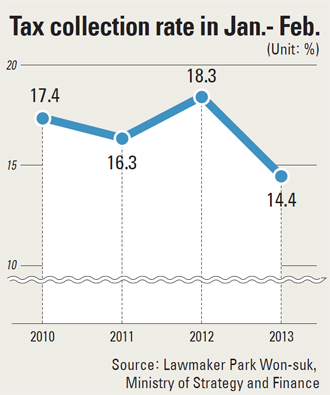 The rate of tax collection stood at 14.4 percent as of February, lower than the rate during the global financial crisis, according to a report by lawmaker Park Won-suk, who is a member of the Strategy and Finance Committee at the National Assembly.

Based on data from the Ministry of Strategy and Finance, the report, released yesterday, said that in January and February the government collected a total of national tax revenue worth 31.1 trillion won ($29.9 billion).

In the same period last year, the government had a similar tax-collection rate and ended up with an 8.5 trillion won tax revenue shortfall at the end of the year.

If the trend continues, it will be difficult for the government to reach its goal of 216.5 trillion won in tax revenue this year, Park said. The goal is higher than last year’s.

The report by Park contradicts the Finance Ministry’s earlier statement that there will be no tax revenue shortfall this year.

“The government should focus on rooting out tax evasion and defaults in order to keep its promise,” Park said.

The Park Geun-hye administration’s fiscal policy was called into question after last year marked the biggest tax revenue shortfall since 2000, the ministry said in February.

Finance Minister Hyun Oh-seok said yesterday that the ministry will spend more from the government budget in the first half of the year than it planned, up from 161.5 trillion won to between 165 trillion won and 170 trillion won, since the economy isn’t recovering quickly enough.

But Hyun said he is aware of the low tax-collection rate, and is considering utilizing surpluses in national pensions to add to the spending from the budget.