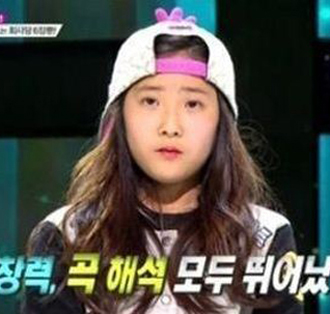 Yang Hyun-suk, better known as the head of K-pop powerhouse YG Entertainment, announced that he has recruited Lee Chae-young, a contestant from SBS’s latest audition program “K-pop Star,” as a trainee.

The news was revealed yesterday, less than a week before the grand finale of this year’s “K-pop Star.”

As a judge on the program, YG can recruit finalists to the company, but as Lee was eliminated in a preliminary round, the news surprised many people.

Lee, who is now in the sixth grade of elementary school, made a splash in the earlier audition rounds when she sang “Forget You” by Cee Lo Green. YG and Park Jin-young, who leads JYP Entertainment, were both impressed by her performance, which not only featured singing but also hip-hop dancing.

“YG apparently was paying attention to the 12-year-old girl, as she showed her potential as the next K-pop star,” said an official of the agency to local media yesterday.

Yang Hyun-suk has participated as a judge in “K-pop Star” since it first launched in 2011. In the initial season, he recruited Lee Hi, who finished as a runner-up in the competition. A year later, Akdong Musician, the sibling duo of Lee Chan-hyuk and Lee Soo-hyun, joined the company as the winner of season 2.

YG Entertainment noted that Chae-young will be trained under the YG system for at least three to four years before making her debut as a professional artist.