Han River to get movie makeover

Han River to get movie makeover 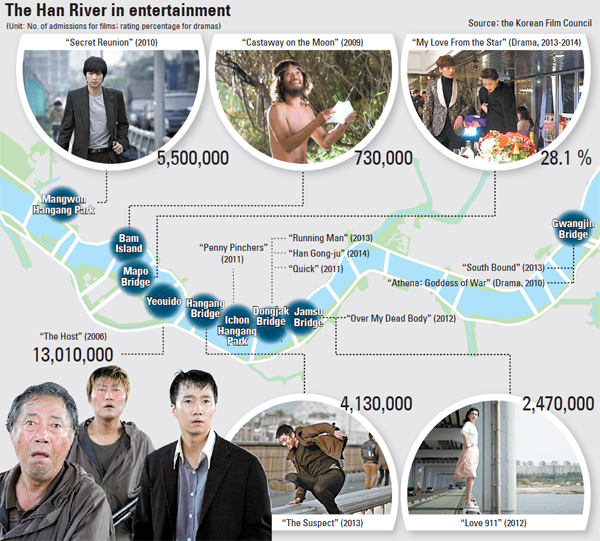 Perhaps one of the most memorable scenes among Korean horror films comes from the 2006 movie “The Host,” in which a massive creature emerges in broad daylight from the depths of the Han River and begins attacking unwitting victims on its banks.

And now movie buffs may be able to see a piece of it in real life, with the Seoul city government planning to turn parts of the Han River once featured in movies and dramas into tourist draws by replicating the buildings and props used on set.

As far as the monster movie is concerned, the government will reproduce the small snack bar maintained by slacker dad Park Gang-Du (Song Kang-ho) in the flick, set to be placed in the park between Mapo Bridge and Seogang Bridge.

The stand was a regular setting in the film, where Park’s family members floated ideas as to how they should defend themselves and save the protagonist’s daughter, Hyun-seo (Ko Ah-sung), from the mutant’s clutches.

“We will restore the snack bar to its original state,” said a city office official who declined to be named. “The stand won’t sell food because then it would hurt sales of nearby convenience stores, but we are planning on selling movie-related souvenirs.”

With 200 million won ($192,200) allotted for the project, the Seoul Metropolitan Government will also set up a miniature of the creature under the Wonhyo Bridge, where the monster lurked in the shadows after killing and feasting on its victims, along with maps that pinpoint areas featured in various TV dramas and films.

“The Host,” the most successful movie in Korea by admissions, according to the Korean Film Council, shot 80 percent of its scenes in or near the Han River.

The popular Korean drama “My Love From the Star” was also shot along the Han River for an episode in which its main characters host a party on a cruise ship.

According to the city government, that cruise ship recently experienced a drastic increase in the number of Chinese visitors. It added that it will establish a photo zone on the boat.

Movie crews have used the river, as well as its islands and recreational park.

“Castaway on the River” was filmed on Bamseom, a pair of islets in its waters, where Seoul will also set up a photo zone for fans and tourists.

There are a total of 27 bridges across the Han - some for cars and trains only, but a few for pedestrians. There are also eight cafes located on its bridges that offer ideal vantage points for a panoramic view of the capital city.

More than 200 movies and dramas have been filmed on site at the park and the river’s bridges and cafes.

Filming for “The Avengers: Age of Ultron” on Mapo Bridge recently wrapped, further cementing its standing as a popular film set.

“The river can accommodate a number of different scenes and environments, and I believe this is precisely why it is so popular among movie makers,” said Lee Geun-cheol, of the Seoul Film Commission. “If the city makes it more distinctive and restores [movie] locations, the river can draw more tourists.”