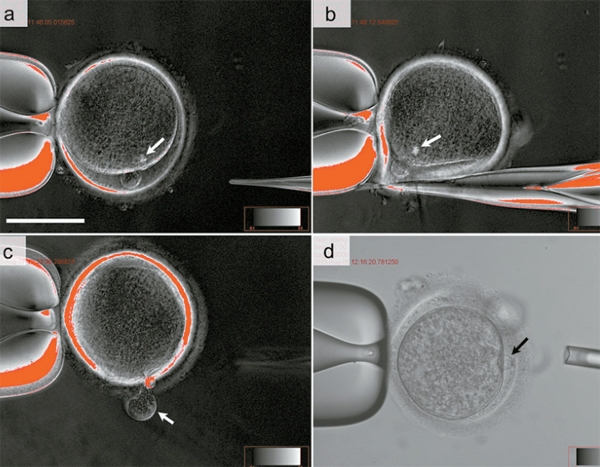 Diagram shows the process of somatic cell nuclear transfer. (a) The arrow shows a normal human egg with genetic material containing DNA that must be eliminated; (b) An area of transparent membrane below the genetic material is removed; (c) Knife is used to squeeze out the nucleus and genetic material; and (d.) an adult man’s somatic cell (pointed with arrow) is inserted.

People with Parkinson’s disease, dementia, stroke and other chronic conditions are one step closer to a potential cure after a Korean research team succeeded in developing embryonic stem cells from cells taken from two adult men.

Scientists from the CHA University Stem Cell Institute announced yesterday they have developed a line of embryonic stem cells by transferring two nuclei from male skin cells into nucleus-free eggs.

The paper was published early this morning, Seoul time, on the website of the American science journal “Cell Stem Cell.” It is the world’s first successful stem cell research using an adult’s somatic cell.

“This research is meaningful in assuring the possibility of developing an embryonic stem cell out of regular somatic cells extracted from each adult,” said Lee Dong-ryul, co-author of the paper and head of the research team, at a press conference yesterday.

Here’s how it works: First, stem cells extracted from the line are inserted into a donated egg that contains no nucleus or genetic information. The integrated stem cell starts differentiating to adapt to the new cell system and then produces new healthy cells when directly transplanted on a diseased body part or organ. This transfer technique will enable development of stem cell shots customized for individual patients without triggering rejection by the immune system because the stem cells are made from the patient’s own DNA.

In the past, such research incorporated stem cells from embryos and adult stem cells, usually extracted from a baby’s umbilical cord blood and placenta. The method became ethically controversial due to divergent perspectives on whether an embryo is considered a human being. In addition, it caused rejections in patients who had to take drugs to suppress their immune systems. 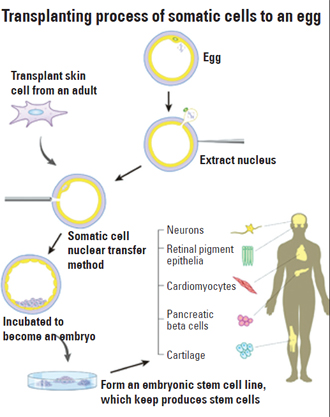 Process how the embryonic stem cell line forms.Provided by the CHA Medical Group

Being second in terms of utilizing the transfer method, Lee’s Korean team is the first to use skin cells from two adult men aged 35 and 75.

“Adult somatic cells are way more difficult than those of children to be differentiated into an embryonic stem cell,” said Kim Dong-wook, a professor at Yonsei University College of Medicine and the Yonsei Stem Cell Research Center. “Lee’s team has taken a large step forward technically compared to Mitalipov’s team. The research was also medically meaningful because most patients in need of stem cell treatment are seniors.”

In joint research with Advanced Cell Technology, a U.S.-based biotechnology company, the Korean team is conducting ophthalmologic clinical tests on patients who suffer from Stargardt disease and retina degeneration using their own somatic cells.

“Once we confirm the stem cells are capable of differentiating themselves, customized treatment on individual patients can begin,” said Lee.

At the same time, Lee emphasized the need to carefully examine safety issues. He explained that the technique will undergo safety tests for the next 18 months, and then start testing on the customized treatment. He hopes the method can be commercialized within five years.

Regarding questions about the study’s relevance to Hwang Woo-suk’s 2004-5 studies, Lee explained the two studies were conducted on the same basis.

“This study is basically a step developed from Dr. Hwang’s research attempts because there’s not much technical difference between the two technologies,” said Lee. “He and I aimed at developing an embryonic stem cell from an adult patient’s somatic cell, but he failed.”

Hwang published a study in the American journal “Science” in 2005, saying he succeeded in transferring a somatic cell into an egg and developing it into an embryonic stem cell. The study was later retracted for using faked data and violating Korean bioethical regulations. In addition, many suspicions arose that Hwang’s stem cell was actually a result of parthenogenesis, in which an egg starts dividing by itself due to external stimuli, such as electric shock, outside the fertilization process.