About 500 students, parents and residents of Ansan, Gyeonggi, hold a vigil for the safe return of missing students Thursday night at the playground of Danwon High School, carrying messages of hope and smartphone flashlights. By Kim Seong-ryong

JINDO, South Jeolla - On the third day of attempts to penetrate the capsized Sewol ferry, divers yesterday succeeded in getting inside the ship in a desperate effort to find, and possibly save, 268 passengers and crew still missing.

But their stay in the doomed ferry only lasted 14 minutes, and they found no survivors or dead.

The tragic accident took one more casualty on land, far from the capsized ship, when the vice principal of Danwon High School, who was rescued from the Sewol Wednesday, hanged himself on a mountain in Jindo, South Jeolla, at around 4:05 p.m. yesterday.

The vice principal, who was surnamed Kang, killed himself after he was questioned by police as to whether he took proper care of a group of 325 students and 14 teachers he was leading after the ferry started to capsize.

The 11th graders were on a four-day trip to Jeju Island.

Kang committed suicide near a gymnasium in Jindo that is housing relatives awaiting word of the fates of the students and teachers.

The search and rescue operation took advantage of relatively calm weather yesterday following two days of heavy rain and wind. Two divers were able to enter a freight compartment located on the second deck of the ferry yesterday at 3:38 p.m. They got in through an entrance to the deck.

But the divers withdrew from the ferry after a rope that connected them to a rescue boat above was snapped after only 14 minutes. Authorities said they would send divers for another try in the succeeding hours, using flares after nightfall. The divers saw no survivors or corpses. 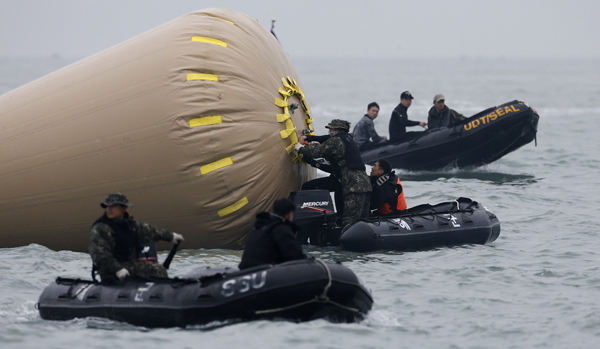 Members of the South Korean Navy’s Ship Salvage Unit work on a buoy to mark the location of the capsized ferry Sewol as they take part in a rescue operation in the sea off Jindo, South Jeolla, yesterday. [REUTERS/NEWS1]

As of 6 p.m. yesterday, the death toll had risen to 28 after the bodies of 18 people were found in the preceding 24 hours. The total number of passengers and crew on the Sewol when it capsized for unknown reasons in waters off the southwestern coast Wednesday morning was 475. The number of rescued is 179, and 268 remain missing.

Of the 28 dead, 12 were identified as 11th graders from Danwon High School in Ansan, Gyeonggi, who comprised the biggest contingent of the passengers on the doomed ferry. Only 75 students were rescued after the capsizing Wednesday morning, and 236 remain missing.

The authorities had only identified 21 victims as of 6 p.m. yesterday and were working to identify the other seven casualties.

The Navy and the Coast Guard conducted a joint operation to inject oxygen into the ship in the hopes that it would float the capsized boat and allow any survivors inside the ship to breathe.

If located in air pockets in a sunken ship, people can survive up to 72 hours, experts say.

The Navy also attached bags of oxygen, so-called lift bags, along the side of the ferry to steady it.

The Navy’s decision to attach lift bags came after the tip of the hull protruding from the surface of the water disappeared from sight completely at 12:58 p.m. yesterday as the bottom of the ferry, which is stuck in mud on the sea bottom, slipped deeper. The slipping of the ferry beneath the surface panicked the families awaiting word at the gymnasium in Jindo, where they have camped out over the past three days.

In an attempt to prevent the ship from sinking deeper, the authorities said they will attach 24 lift bags around the ship.

The inconclusive news reports boosted a sense of despair and frustration for nearly 600 relatives of the missing in the Jindo gym. Cries of helpless parents and other relatives hoping for a miracle were constantly heard, and many clung to the belief that they will be reunited with their sons and daughters.

In the gym yesterday, people yelled, sobbed uncontrollably, fainted - and lamented the government’s poor communication about the progress of rescue efforts.

Two Coast Guard officials on the scene were hit with a plastic water bottle by an enraged man after failing to answer questions on the number of rescue workers who entered the ferry’s hull and the number of ambulances on site.

“I don’t believe anything that the government says,” said a 58 year-old man surnamed Kim. “I have had enough of them for the past three days. All they do is give us false information or reverse what they said before.”

Kim’s niece, an 11th grader from Danwon High School, is unaccounted for. “We are enraged that the government is not doing its best to save people trapped inside the ship,” Kim said.

Choi Sang-hwan, a deputy head of the Coast Guard, said yesterday morning that authorities planned to inject air into the ferry at around 9:30 a.m. to 10 a.m. in an effort to supply oxygen for possible survivors.

Some relatives were hooked up to IVs. At least five people yesterday were carried out of the gym on stretchers.

“Put President Park Geun-hye on the line!” screamed a parent at the two Coast Guard officials. “Everything we hear from the authorities is total lies. Put Park on the phone!”

Unconfirmed rumors spread unabated through the packed gymnasium. One rumor said autopsy reports of some of the young victims showed they had died just minutes before their remains were found, causing screams in the gym.

But hope for a miracle had not died as of yesterday afternoon.

“Jin-kwang’s friends trapped in the ferry sent a text saying my brother was still alive in a kitchen on the third deck of the ship,” said Kim Jin-hyung, 27, a sister of an 11th grader who is unaccounted for. Kim was camped out in the gym with her parents and her twin sister, Jin-joo.

The text referred to was one of many messages allegedly sent by students trapped inside the capsized ship. The government thinks the messages are not authentic.

“We know God is protecting our brother,” said Jin-joo, the twin sister. “We know he will come back.”