Some classes need a warning label

Some classes need a warning label 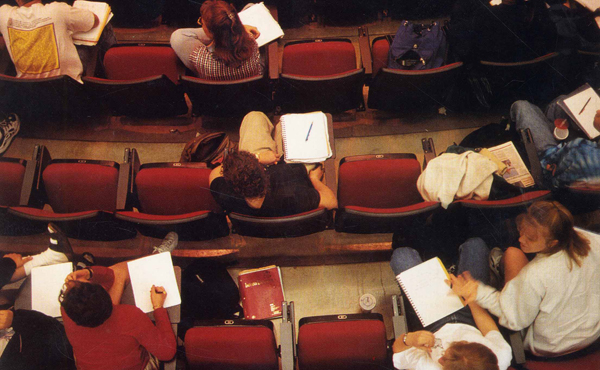 The student senate at the University of California-Santa Barbara recently set off a bit of a firestorm by passing a resolution requiring professors to issue “trigger warnings” to protect students from potentially upsetting content. The idea is pretty simple: Professors would write notes on their syllabi to alert students on which occasions a course’s material will be, say, sexually graphic. Students could then excuse themselves from class without being punished academically. (The resolution needs to be passed by another committee of faculty and students to go into effect.)

Although the students intended for the warnings to help students who had endured terrible events in their lives, the Los Angeles Times editorial board called the policy an “attack on academic freedom.” I understand that concern, but my own experience suggests that the student senate is right - advance notice of graphic material can help students make appropriate personal decisions without undermining the freedom of professors to teach.

In 2011, during my sophomore year at Northwestern University, I took a popular psychology class called “Human Sexuality” to fulfill a science requirement. Although I knew in advance the course’s material would probably be graphic, I figured that since it was taking place in an academic setting and at a university I trusted, I’d emerge the better for it.

I’m still not sure if that’s what happened.

Trigger warnings in various forms have long been used on the Internet to alert readers to potentially upsetting material. More recently, Oberlin College established a trigger-warning policy, but after faculty members raised concerns, the recommendation remains under review.

According to UCSB’s student senators, the goal of their proposal is for students dealing with post-traumatic stress to avoid uncomfortable classroom situations instead of having to draw attention to themselves by leaving a class mid-lecture. The student who sponsored the proposal, Bailey Loverin, said she had endured sexual abuse and that the idea originated in her experience watching a film in class that depicted a graphic rape. “This is not to protect people from being offended or upset, but to help people who have a trigger effect to the point where they’re breaking down, passing out or running out of the classroom,” she told me.

Of course, there’s a potential for trigger warnings to be abused if teachers view them as a way to excuse themselves from using their own judgment and as an easy means of avoiding repercussions for bad decisions. More promising, though, is the possibility that trigger warnings could foster more effective classroom discussion and make students feel more comfortable with course material. According to the proposal, even if material were labeled with a “trigger,” professors would still be free to use it; students who would be unable to participate would simply know ahead of time.

College is undoubtedly a time when young people should explore and push their limits, including feeling uncomfortable. And they might as well get used to a world populated with adults who exercise poor judgment, including more than a few university professors.

Trigger warnings could, and should, also spur professors to ask themselves, “Is this really necessary?” And they would alert university administrators to just how graphic some course material is, prompting discussion of whether it’s truly needed. Beyond the intended beneficiaries - those with PTSD - the notices could help students with religious or moral objections avoid graphic images that deeply offend them.

Could this be a slippery slope to coddling all kinds of personal preferences? Of course. But then again, if Northwestern’s “Human Sexuality” course had come with a syllabus full of trigger warnings, Professor John Michael Bailey might have thought twice - and still have a human sexuality class to teach.

*The author is the web producer for Bloomberg View.