After disaster, should kids obey grown-ups?

After disaster, should kids obey grown-ups? 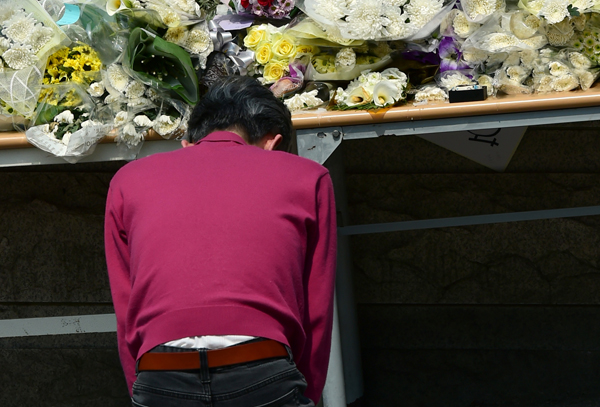 A man bows at the main gate to Danwon High School in Ansan, Gyeonggi, yesterday, where chrysanthemum flowers are placed as tributes to the victims of the sunken ferry Sewol. [NEWSIS]

In the wake of the Sewol tragedy, parents are wrestling with the lessons they should impart to their kids in future - specifically, should they trust and follow the advice of grown-ups?

For the passengers of the Sewol, students who ignored the advice of the ship’s crew managed to survive, while those who obeyed are assumed to have perished.

Some of the surviving students were kids who went up to the top deck to smoke cigarettes.

In the video footage taken by survivors and widely circulated by the media, students are seen sitting calmly inside rooms below deck even when the ship was listing severely. On some clips you can hear the commands of the crew for the kids to stay put and not try to escape.

When those clips were posted online, people expressed pity and grief, but at the same time commented that the students may have not been that calm without the commands and advice of the adult crew.

“The situation would have been different if most of the passengers were grown-ups,” said Shin Kwang-young, a professor of sociology at Chung-Ang University. “The number of victims possibly sharply increased because many of passengers were students, who are relation-oriented and listen to what adults say.”

“Those who did not follow the announcement and came out lived, and those who listened to it are missing,” said a 42-year-old mother of a child who is in middle school. “When I discuss this with other parents from our school, we say that maybe we should tell the kids not to trust strangers or teachers anymore.”

“How can kids trust grown-ups when they hear that the captain and crew of the Sewol ran away after telling the kids to stay put?” said another 32-year-old mother of an elementary school student. “I’m not certain whether I should teach my child to listen to adults in an emergency - or to just run away as fast as he can.”

Teachers, too, are at a loss. “If I was there, I wouldn’t have told the students to leave the ship,” a 32-year-old elementary school student said. “I’m not sure how far teachers are supposed to decide on their own.”

But some analysts hope the lesson from the Sewol tragedy is not that everyone should act on their own impulses. “In advanced countries, the basic step in an emergency situation is to follow orders from leaders,” said Lee Won-ho, a professor of architectural engineering at Kwangwoon University. “But there should be sophisticated instruction and training so those leaders don’t make the wrong decisions.”