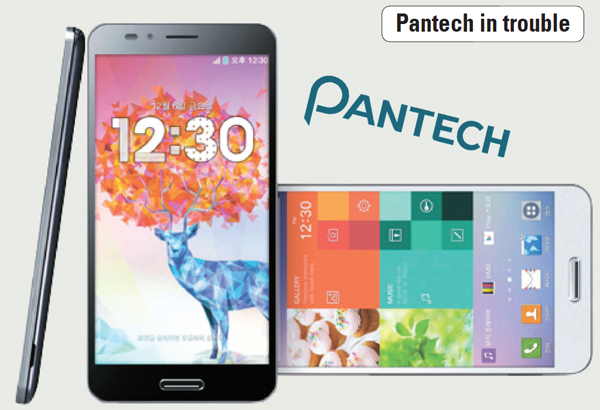 Pantech, Korea’s smallest mobile phone maker, which is undergoing debt restructuring, is facing another financial burden in the form of discounted phone prices given by mobile carriers.

The mobile carrier said that the main reason for the decision was to help Pantech’s business get back on track, claiming that lowering the price would alleviate consumer pressure when purchasing Pantech smartphones and boost Pantech’s sales.

KT, the nation’s second-largest mobile carrier, followed LG U+ immediately, saying it will sell the Vega Secret Up, which was released last December, at the same price as LG U+. 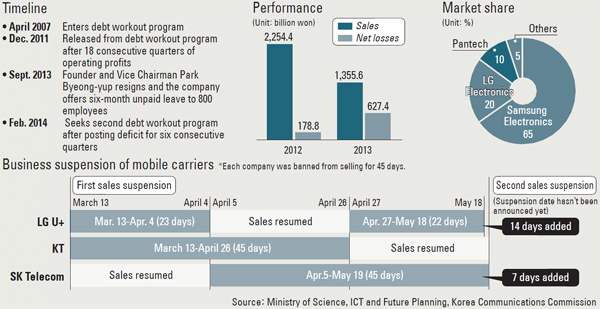 Industry insiders said that the announcement by LG U+ was reasonable. The Vega Secret Up was priced at nearly 100,000 won more than Samsung Electronics’ latest smartphone Galaxy S5, which was released last month, so it was not attracting many consumers.

But with the price lowered to 600,000 won with a 270,000 won subsidy from mobile carriers, buyers can get the Vega Secret Up for about 300,000 won. Including discounts from each carrier’s payment plan, the actual price paid by a customer is cheaper.

For Pantech, which began its second debt-workout program in February, a lower price could help it get rid of inventory. According to mobile carriers, Pantech’s smartphone inventory is at least 600,000 units.

“Pantech wanted to lower the Vega Secret Up price, but since its largest customer, SK Telecom, opposed the move, the company was stuck,” said a spokesman from LG U+. “In this situation, LG U+ decided to step up for the sake of Pantech.”

But just two hours after the announcement by LG U+, Pantech released a statement saying that it opposes the move by LG U+ because the company did not offer a sales guarantee and that Pantech would have to pay inventory compensation.

The inventory compensation means that the handset maker has to pay the companies the difference between the price that the carriers originally purchased the product for and the retail discount. For example, as the Vega Secret Up is now selling for 600,000 won, Pantech needs to pay LG U+ or KT 350,000 won for each item sold.

“It is necessary to lower the price, but 350,000 won is too much,” said a spokesman from Pantech. “There should be an agreement with the three mobile carriers that they will support compensation and also the volume of additional purchases.”

In addition, the local mobile carriers’ business suspensions are not helping Pantech. Korea’s three mobile carriers have each received a 45-day operating suspension order from the government for offering excessive subsidies to their customers.

While Samsung Electronics and LG Electronics can generate profit from exports, Pantech relies heavily on the domestic market. The company complained that the suspensions have harmed handset makers in addition to the mobile carriers.

Industry insiders said that Pantech’s business plan could become more passive because its decision to lower or raise the prices of products can benefit one mobile carrier but damage other carriers. For instance, while LG U+ is selling the Vega Secret Up for a lower price, SK Telecom, which is suspended until May 19, could lose customers.

Meanwhile, Pantech said yesterday that it decided to postpone the introduction of its Vega Iron 2 following the Sewol sinking. The company was going to unveil the phone tomorrow but is now planning for next month.

The phone was scheduled to come out in late March, but it was delayed due to the business suspensions.

The Vega Iron 2 is expected to compete with the Galaxy S5 when it is released. It reportedly has a 5.3-inch screen, 0.3-inch larger than the previous Vega Iron, and it is equipped with a 3,200 milliampere-hour battery.