BMW charges into the EV market with new i3

BMW charges into the EV market with new i3 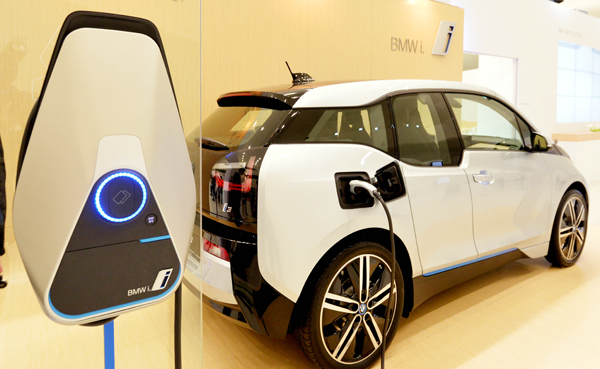 BMW’s first all-electric vehicle, the i3, is on display yesterday at an art hall inside the Dongdaemun Design Plaza in central Seoul. Of the three versions of the i3, the i3 SOL and the i3 VIS were introduced yesterday, while the i3 LUX will be released in the latter half of this year.[NEWSIS]

BMW released its first all-electric vehicle, the i3, yesterday, heating up competition in the local electric-vehicle (EV) market.

“BMW i3 is the form of mega city transportation that will fundamentally solve environmental problems and the lack of resources,” said BMW Korea CEO Kim Hyo-joon during an event at Dongdaemun Design Plaza in eastern Seoul.

The i3, which is manufactured in Leipzig, Germany, will be offered in three versions in Korea. While the premium i3 SOL and i3 VIS were introduced yesterday, the cheaper i3 LUX will be released in the second half of the year, according to BMW Korea.

Although consumers will get subsidies from the government for the environmentally friendly vehicle, the i3 will still be the most expensive EV in Korea.

Kim said the price of the i3 in Korea is actually 3 million won cheaper than in Germany. BMW Korea said it will sell 250 units of the i3 this year and more than half are already preordered.

“We plan to bring in 500 i3s next year, but since it is popular globally, securing volume for the Korean market will be key,” Kim said.

The i3, the only rear-wheel drive EV in the local market, uses BMW’s eDrive electric motor, which provides a maximum 170 horsepower and torque of 25.5 kilogram-meters. It can accelerate from zero to 100 kilometers per hour (62.1 miles per hour) in 7.2 seconds, faster than the company’s 320d sedan.

In addition, the EV weighs only 1,300 kilograms (2,866 pounds), 200 kilograms less than Kia’s Soul EV, thanks to a body made of carbon fiber reinforced plastic.

Equipped with a lithium-ion battery made by Samsung SDI, the i3 can travel 132 kilometers (82 miles) with a full charge, and the range can be extended if driven in “eco-mode,” BMW Korea said.

The company added that 80 percent of the battery capacity can be charged in 30 minutes thanks to a quick charging system. The i3 uses the DC Type 1 Combo quick-charging system, which is also used by the Spark EV. It takes three hours for normal charging.

BMW Korea said it signed a deal with IT system provider Posco ICT and the country’s largest discount chain, E-Mart, last month to establish EV chargers. It plans to set up more than 120 chargers this year at 60 E-Mart branches nationwide.

For customers who use a Wallbox, a charger that can be installed at home, BMW Korea said a full charge will only cost 1,330 won worth of electricity if the Korea Electric Power Corporations’ special EV fare is factored in. If an owner drives 1,500 kilometers a month in the i3, it will cost only 32,500 won.

The Wallbox will be sold separately for 3 million won. BMW Korea said it is considering renting chargers to customers. A home-use emergency charger, which uses 220 volt power, is offered at no cost.