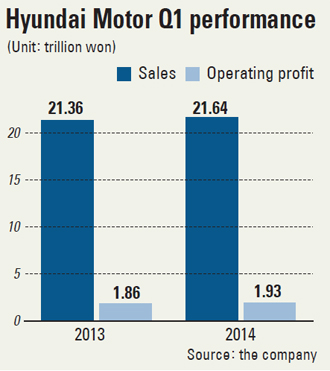 In a regulatory filing yesterday, Hyundai said its revenue in the first quarter reached 21.65 trillion won ($20.8 billion won), a 1.3 percent increase from a year ago.

Although operating costs were up slightly compared to a year ago due to the promotion of new models like the second-generation Genesis and LF Sonata, its operation cost-to-revenue ratio was 13.1 percent, down 0.2 percentage point.

However, Hyundai’s operating profit from automobile business fell 3.3 percent from a year ago to 1.45 trillion won. This loss was offset by Hyundai Capital America, which had operating profit of 316 billion won, up 7 percent year-on-year.

But what’s more concerning is declining net profit due to the strong won.

The automaker said net profit dropped 2.9 percent year-on-year to 2.03 trillion won in the first quarter. Compared to the last three months of 2013, net profit is down 4.7 percent.

The won’s strength against the U.S. dollar, along with the weak Japanese yen, has been eroding net profits of exporters like Hyundai.

Korea Exchange Bank data shows the average exchange rate was 1,084 won to the dollar in the first quarter of 2013, but in the first three months of this year it averaged 1,069.

With the exchange rate below 1,040 won per dollar, Hyundai said the external environment surrounding auto industry will be much more difficult in second quarter. It also cited rising competition from imported cars in Korea.

“We do have contingency plans regarding the won-dollar exchange rate,” said Hyundai Motor Chief Financial Officer Lee Won-hee. “But we expect the exchange rates of emerging markets that surged in the first quarter to stabilize and enhance profitability.”

Hyundai expects strong sales of the new Genesis and LF Sonata in the United States, while boosting sales in China with localized models.

Meanwhile, Posco, Korea’s largest steelmaker, announced its first quarter performance yesterday, with net profit off 81 percent from a year ago due to exchange rates and tax penalties.

The company said in a regulatory filing that its net profit in the January-March period was 55.65 billion won, including subsidiaries.

However, Posco’s sales went up 5.9 percent to 15.44 trillion won, while operating profit jumped 2 percent to 731.26 billion won in this first quarter.

Posco said it paid 190.4 billion won as a tax penalty during the quarter.