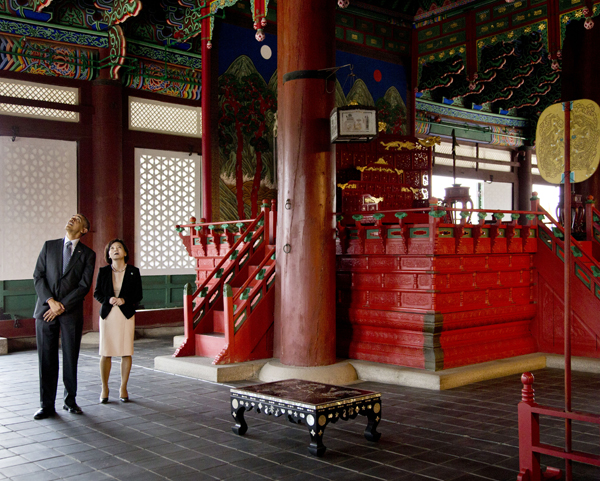 President Barack Obama tours Gyeongbok Palace in central Seoul, the first U.S. president to do so, guided by Park Sang-mi, professor of multiculturalism at Hankuk University of Foreign Studies. Park, a member of the Cultural Heritage Committee, has been active in spreading Korean culture and food abroad, such as pushing for kimchi to be included in the Unesco Intangible Cultural Heritage of Humanity last year. Park explained to Obama the history of the 600-century palace and also the significance of the royal and national seals that the U.S. president returned to Korea yesterday. [AP/NEWSIS]

The seals, stamps used to authorize documents in lieu of signatures, are from the Joseon Dynasty (1392-1910) and the Korean Empire (1897-1910). Obama handed the seals over to Park personally yesterday after a bilateral summit at the Blue House. He is on a two-day Seoul visit, the second stop of a four-country Asia tour.

Although this was Obama’s fourth visit to Seoul since his inauguration as president, it was his first trip to Gyeongbok Palace.

He is the first U.S. president to visit the palace.

Perhaps the most significant of the returned treasures is the Hwangjejibo Seal of the Emperor, a national seal made in 1897 to mark the establishment of the Korean Empire, sometimes called the Daehan Empire, referring to the final years of the Joseon Dynasty when the country declared itself an empire in an attempt to defend its sovereignty.

The nine seals were taken out of the country by a U.S. Marine lieutenant during the 1950-53 Korean War. The Marine said he found them in a ditch near Deoksu Palace in Seoul in 1950 after it was ransacked by Chinese and North Korean soldiers.

Last November, agents from the U.S. Immigration and Customs Enforcement’s Homeland Security Investigations’ directorate received the seals from the family of the deceased former Marine.

Since then, the Cultural Heritage Administration has been negotiating the return of the seals. Experts estimate their value at tens of billions of won in art markets, but they are priceless to the country because of their historical value.

Others royals seals include the Yuseojibo, stamped on documents when regional government officials were appointed by the king, and the Junmyeongjibo, used on letters containing the king’s orders sent to chunbang, or the government branch in charge of educating the crown prince.

Earlier yesterday, Obama visited Gyeongbok Palace in central Seoul for the first time, guided by Park Sang-mi, professor of multiculturalism at Hankuk University of Foreign Studies, a member of the Cultural Heritage Committee. Obama made a speech at Hankuk University during his 2012 visit.

Park shared with Obama the 600-year history of the palace and explained the significance of the returned seals to the president. She said that being a Joseon Dynasty king was not always an easy position, and Obama replied that the U.S. president’s position is the same.

Gyeongbok Palace was built in 1395 as the main royal palace during the Joseon Dynasty. Its main premises were burnt down during the Imjin War, the Japanese invasion of the Korean Peninsula from 1592 to 1598, but were restored between 1865 and 1867 under Kim Gojong.

Obama also paid a visit to the War Memorial of Korea in Yongsan, central Seoul, where he laid a wreath and led a naturalization ceremony for 20 military service members and their spouses from 14 countries.