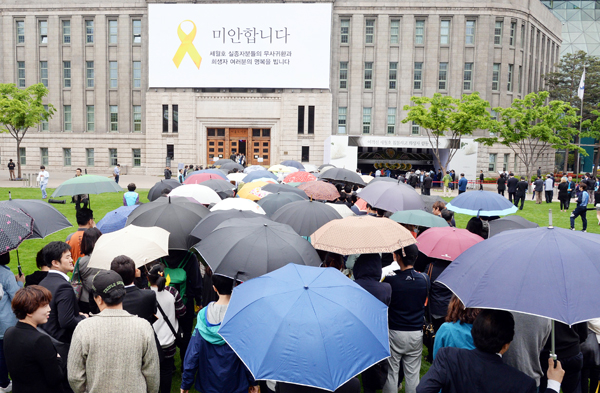 The Seoul Metropolitan Government yesterday installed a mourning altar for the victims of the ferry disaster at Seoul Square in central Seoul. Thousands of people visited the altar only several hours after its opening.[NEWSIS]

Only 174 out of 476 passengers onboard the doomed ferry were rescued from the ship - all on April 16, the day of the fatal accident.

The majority of them were 11th-graders from Danwon High School in Ansan, Gyeonggi, who were on a class field trip to Jeju Island. Of the 325 student onboard, only 75 were rescued.

The Coast Guard, which is leading the search operation, said in a briefing yesterday that debris inside the sunken ship floating in front of the ship’s entranceways, corridors and cabins were aggravating efforts to get inside and navigate inside the ferry.

“In too many places inside the ship, carpet, blankets and furniture are floating around, blocking the entranceway for divers to get inside and hampering the search and rescue operations,” Kim Suk-kyoon, the head of the Coast Guard, said yesterday during a press briefing. “We are currently considering ways to clear them out of the way, but as of right now, we have no tangible solutions.”

He added that officials had originally proposed breaking a window in the front of the ship to remove the floating objects. However, “because of the risk of losing the remains of the victims during the process, we ruled out that idea,” he said.

Murky waters inside the wreck have forced divers to make their way through the ship’s upturned corridors and cabins largely by touch.

According to the emergency crisis management team, divers can only see about four to eight inches (20 centimeters) in front of them, which has made distinguishing bodies from debris difficult.

In a desperate attempt to improve conditions for rescuers, Coast Guard officials decided Friday to ready a diving bell at the accident site. The bell-shaped metal structure is equipped with an airtight chamber where divers can rest, allowing them to stay underwater for more than an hour.

Authorities requested the diving bell from a private salvage company. They initially decided against using it in the first few days of the disaster, citing bad weather conditions and safety concerns.

Coast Guard officials were concerned that the wires that connect the bell to a barge above water could tangle with the oxygen supply lines. However, due to the strong current, authorities decided against deploying the bell after it failed to anchor to a barge meant to hoist it underwater. It is expected that the rescue team will make another attempt to use it tomorrow.

On Friday, Lee Sang-ho, a reporter for Gobal News, apologized for directing foul language toward Yonhap News Agency the previous day over what he claimed was its unbalanced coverage of the rescue efforts.

During a live news program on Thursday, Lee criticized a report by Yonhap - which called the rescue operation one of the largest and most unprecedented in history - by using foul language against one of its reporters.

Lee claimed that Yonhap was seeking to file a lawsuit against him for defamation. However, a senior official at Yonhap told the JoongAng Ilbo that the company plans no such legal action against him and is currently watching the situation unfold.

Lee has been vocally critical of what he considers the government’s lukewarm response to rescue efforts.

Footage in which Lee swore at the Yonhap reporter went viral on social network sites, reflecting lingering public mistrust of the government and the media in dealing with the rescue.

Strong waves, fierce winds and low visibility once again hampered efforts by authorities yesterday to retrieve and recover bodies still trapped inside the capsized Sewol ferry in waters off the country’s southwestern coast.

Divers recovered just one body as of 5 p.m. yesterday, and more than 100, mostly schoolchildren who were on a class trip, still remain unaccounted for.

The lack of progress in search and rescue operations has only added to the sense of despair and grief among the passengers’ families, who continue to camp out in an indoor gymnasium in Jindo, South Jeolla, anxiously waiting for news of their loved ones.

Following less than a week of relatively calm weather, conditions 17 kilometers (11 miles) off Paengmok Harbor, where the 6,825-ton ferry Sewol completely capsized at a depth of more than 30 meters (100 feet), once again worsened over the weekend, with sea waves reaching up to three meters.

The circumstances prompted the Korea Meteorological Administration to issue a high-wave advisory at 4 p.m. yesterday.

It has been 13 days since the disaster. The Coast Guard, joint military and civilian divers have since faced challenging conditions in and out of the water. Rescue authorities searched the depths for more than 30 hours yesterday before they recovered the remains of one victim at 2:12 p.m., bringing the total death toll to 188 and the number of missing to 114.