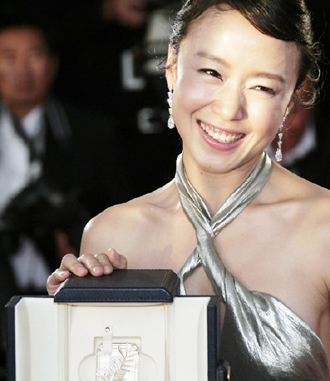 Actress Jeon Do-yeon has been selected as part of the main competition jury for the 67th annual Cannes International Film Festival, according to the official website on Monday.

Jeon is the second Korean to sit on the Cannes festival’s nine-member panel. Filmmaker Lee Chang-dong was a juror in 2009. He directed the 2007 movie “Secret Sunshine,” in which Jeon won the Cannes Best Actress honor.

The judges include notable film figures from around the world, many of whom have been recognized at Cannes before. The team will be led by New Zealand director Jane Campion, who won the Palme d’Or in 1993 for her film “The Piano.”

Filmmaker Sofia Coppola, who directed “Lost in Translation” (2003), is also on the list, along with Danish director and producer Nicolas Winding Refn. Jeon and the other panelists will decide the winner among the 18 films in the competition. The Palme d’Or, or the grand prize, will be awarded at the festival’s closing ceremony on May 25.

The event starts May 14.