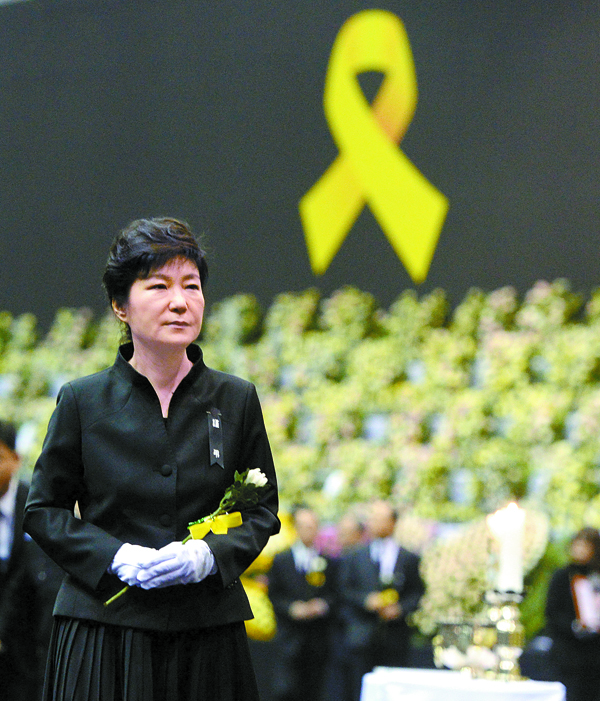 After offering her condolences yesterday morning at a mourning altar in Ansan for the victims of the Sewol ferry accident, President Park Geun-hye apologized at a cabinet meeting later in the day.

“So many valuable lives were lost in the accident, I am sorry and feel heavyhearted,” said the president in a regular cabinet meeting at the Blue House.

The president has been under mounting pressure to apologize for the disaster and a shoddy response that killed 205 and left 97 unaccounted for since the ferry capsized for unexplained reasons off the country’s southwestern coast on April 16.

Min Kyung-wook, the Blue House spokesman, said in a briefing afterwards that the president is considering delivering an official address to the nation in which she would again issue an apology and describe a detailed “master plan for national safety.”

The date is expected to be around mid-May, according to sources at the presidential office, after retrieval operations of the ferry are concluded.

As widely expected, Park used the cabinet meeting to promise various measures to prevent and handle disasters like the Sewol’s capsizing and to root out the red tape that may contribute to them.

She announced that the government would establish a tentatively titled “national safety division” under the Prime Minister’s Office to streamline the management of both natural and man-made disasters. The new body will become a so-called control tower for disasters. It will be led by whoever replaces Chung Hong-won, who tendered his resignation as prime minister on Sunday.

“The new national safety division will create an emergency response team that conducts drills with scenario of accidents that could cause immense damage to human life and properties,” she said.

Examples of accidents she cited were chemical leaks, oil leaks at sea and accidents in the electricity and telecommunication networks.

The president vowed to hire experts - including foreigners - for the new body. Her proposal is set to become part of a revised bill on restructuring the government, which is to be discussed at the National Assembly.

Park, noted for cherishing rules and principles, stressed the need to find the cause of the Sewol accident and the facts behind the government’s mishandling of the rescue.

“I am extremely regretful that wrong and deep-rooted evils that have piled up layer upon layer from the past resulted in such a mishap,” she said, “I should have stepped up efforts to fix evil and abnormal practices from the beginning of my term. But I will take the path toward recreating a Republic of Korea where people can regain confidence and feel at ease by correcting problems dating back to the past.”

The direct cause of the tragedy was the “irresponsible attitude of the captain and crew members,” she said, but she also blamed “deep-rooted abnormal practices and bureaucracy” in Korean society.

In this context, she ordered an eradication of the practice of high-ranking government officials taking jobs at well-paying private corporations or other public institutions after they retire from the civil service, which perpetuates influence-peddling.

“It’s not just the matter of the back-scratching alliance of businesses and government officials,” she said. “Now that we are living in a world where everything is exposed in real time, hypocrisy or bombastic politics no longer work with the people. The perception that honesty, devotion and sacrifice for the people are the best solution is absolutely necessary.”

In Ansan, the president, wearing a black suit and white gloves, took a look at each and every photo of the victims while holding a white chrysanthemum with a yellow ribbon. She laid the flower on the altar and offered a silent prayer.

After leaving a note of condolence in the guest book, she faced resentment, despair and grief from the bereaved families of the victims, mostly 11th graders from Ansan’s Danwon High School, who were on a school trip to Jeju Island.

“A government official stepping down to assume responsibility is not important,” one relative told Park. “They are your children, president. Of course they belong to me, but they also belong to you.”

While some furious siblings swore loudly at Park, others tearfully poured out stories of their lost sons and daughters. Some even knelt down in front of Park to get her attention.

The 62-year-old president heaved deep sighs while listening and took some of the relatives by the hand.

A woman claimed that the Coast Guard and government officials kept passing the buck in the attempted rescue of the passengers. A man shouted that he has no idea who to ask to rescue his child because he has lost faith in the country’s military and police.

The altar was opened yesterday by the government near Danwon High School.