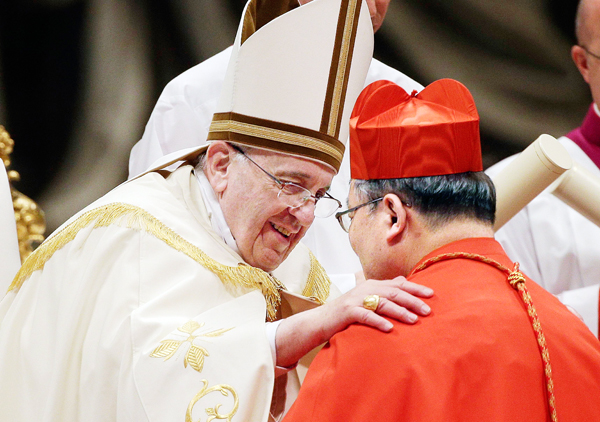 The news about Pope Francis coming to Korea this August has taken many by surprise. Among the faithful Catholics are still a minority in Korea (unlike in the Philippines, for example), and even Japan has a longer tradition concerning the creation of churches and the spreading of the faith. But what makes the Korean church a unique case, not only in Asia but in the whole world, is that is the only example of an evangelization that was started not by missionaries but by ordinary men.

In fact, years before the arrival of the missionaries a group of intellectuals were responsible for discovering the existence of a foreign religion across the border - in China - and to propagate its precepts into their own country.

But if the missionaries came to Korea with hundreds of years of delay, for example, with respect to Japan, it was the arrival of the Jesuits in China that would have important repercussions on the birth of the first Christian communities in the kingdom of Joseon.

The first Jesuits arrived in China as early as the late 16th century, among them the best known is certainly Matteo Ricci. Ricci was one of the first to translate into Chinese not only the texts of catechism but many works of science and literature. These hundreds of translated works attracted many around the religion of these Western missionaries, so much so that soon the first baptisms arrived: In 1608, there were 300 Christians in Beijing and 2,000 throughout the kingdom.

In 1603, these texts were also introduced to Korea thanks to Yi Gwang-jeong, a Korean diplomat in Beijing. He was the first to import the new knowledge inside the perimeter of the homogeneous Confucian society of Joseon.

What happened then in Korea resembles what already had occurred in China years before: Catholicism started to intrigue scholars and began to be investigated. Soon the existence of God, the concepts of immortality of the soul and the divine providence became the subject of discussion in literary circles, especially those who gathered in the temple of Jueo in Seoul. But it was only later that Catholicism ceased to be an academic subject in order to become a religious reality in all respects. It was 1784: The French Revolution would break in five years time, but in the meantime on the other side of the world another revolution was about to set off. This, however, unlike the first, destined to last long.

Yi Seung-hun Peter was the first Korean to be baptized. He had to literally go across the border to seek the sacrament (in Beijing) and to administer it was the French Jesuit Jean-Joseph de Grammont. In fact, contrary to what had already happened in China and Japan, in Korea there was still no presence of priests.

Like sheep without a shepherd, the first Korean Catholic community had few chances to cement their union and many to disperse their primordial vocation. Yet what happened was just the opposite. These first groups of faithful were able to find the strength to remain united and even to thrive.

The first Korean believers used to meet in the homes of scholars Ly Beyok and Kim Beom-u (the latter’s house was on the spot where now stands the cathedral of Myeongdong in Seoul). But then, just when the little community was beginning to flourish with the contribution of many young believers, the first persecutions struck. At least 100 years, out of the 230 of the history of the Korean church, are in fact tarnished by discrimination and martyrdom of many thousands of people: believers were hunted down, forced to renounce their faith and eventually killed.

Nonetheless, despite the lack of priests, despite the persecution that threatened and eliminated the founders of the first group of Christians, despite the hostility and the contempt of the whole society, the few remaining believers were able to regroup. They took refuge in the most remote areas of the countryside where they found a way to spread the precepts of the Gospel in areas never before touched by the preaching. In times of crisis, they found a way to successfully pass down the doctrine to later generations.

If pope Francis has then chosen Korea as his first pastoral visit in Asia, it shouldn’t come as a surprise: it is after all an acknowledgement of the exceptional quality of courage and fortitude displayed by its people throughout their history.

*The author is a journalist of the Osservatore Romano, the daily newspaper of Vatican City State. He is also the author of the book “I was Bergoglio, I am Francis” (to be published in Korea this July).