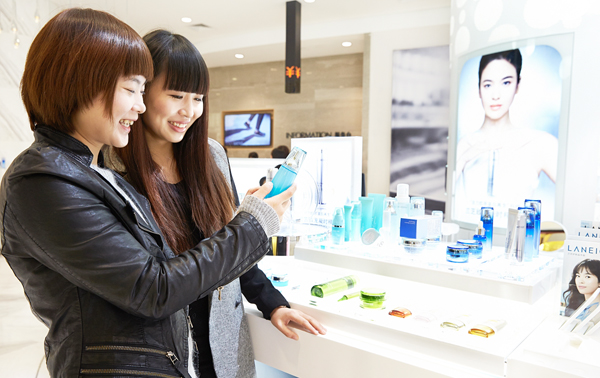 Whenever Ahn Jin-young, a 30-year-old Korean expat living in Singapore, returns home, there’s one thing she never forgets to do: buy a bunch of face packs for her Singaporean friends.

“They are mad about Korean face packs,” Ahn said. “They say the packs are of good quality and they can feel their skin rejuvenate after using them.”

Ahn’s friends are part of a growing number of overseas consumers taking notice of Korean cosmetics. According to the Korea Customs Service yesterday, the export volume of local cosmetics jumped six times in the past 10 years while the range of importing countries widened impressively. 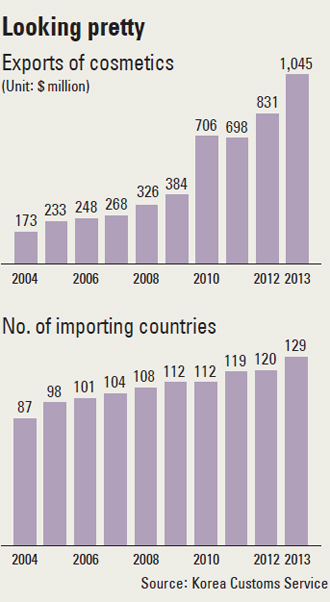 In the first quarter of this year, exports reached $288 million, up from $233 million the previous year.

The number of importing countries 10 years ago was 87, which reached 129 last year.

“The biggest product in terms of volume was skin care products, while demand for cosmetics was also high,” said an official from the customs agency. “Based on our analysis, exports have increased because of the attention being paid to the fashion and makeup styles of Korean actors, actresses and singers.”

Items that appeared in hit dramas like “My Love from the Star” were particularly popular. In China, the makeup and fashion items used by protagonist Cheon Song-yi, like lipsticks, bags and coats, were sought out by consumers.

As for exports by region, data showed that demand was high in China, Japan and Southeast Asian countries. In 2004, the top five countries importing Korean cosmetics were, in order, China, the United States, Japan, Hong Kong and Taiwan. In 2013, the order changed slightly as Asia became the main market. The top market was China, followed by Hong Kong, Japan and the U.S.

“The cosmetics industry is one that creates jobs as it involves labor-intensive work,” the official said. “Growing cosmetics exports are a good sign for the Korean economy as a whole.”

“Our products were especially popular in the Asean region, along with China and Japan, based on the so-called K-beauty trend,” said an official from the conglomerate.