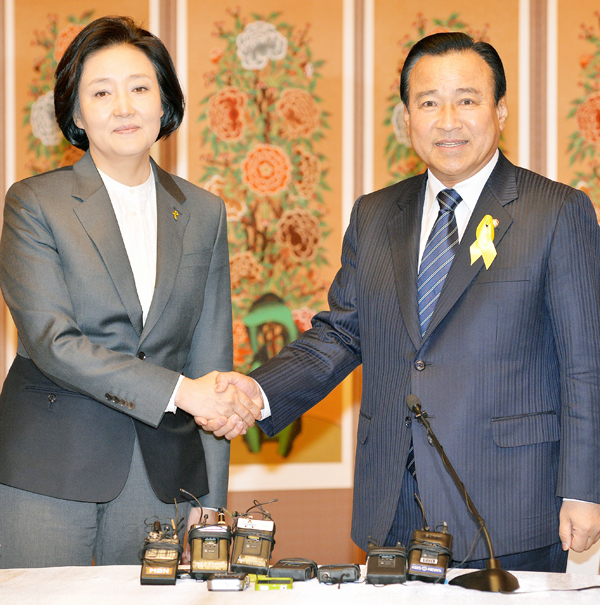 Representatives Park Young-sun, left, and Lee Wan-koo, new floor leaders of the ruling Saenuri Party and the opposition New Politics Alliance for Democracy, shake hands yesterday after reaching an agreement to hold a provisional National Assembly session this month to discuss the measures that should be taken in the wake of the Sewol ferry accident.[NEWS1]

Newly elected floor leaders of the ruling Saenuri and main opposition New Politics Alliance for Democracy (NPAD) parties announced yesterday that they have agreed on holding a provisional National Assembly session this month to discuss the measures that should be taken in the wake of the Sewol ferry accident.

Saenuri floor leader Lee Wan-koo and his NPAD counterpart Park Young-sun said during a joint press conference at the National Assembly yesterday that the standing committee will launch today and the plenary session to discuss when to hold the extraordinary session will begin this week.

The two parties agreed on penalizing those responsible for the accident, offering support to the families of the victims and setting up measures to prevent similar accidents from occurring.

“We could not agree more on the three subjects,” the Saenuri’s Lee said. “Park suggested that the National Assembly should step up and do it first, and I agreed.”

“I thought we must do our best for the [provisional session regarding the Sewol ferry accident],” Park said at the press conference.

“I also think lawmakers should make a special law related to the accident for the people.”

The two floor leaders added that the extraordinary session will begin with a discussion on the National Assembly’s composition for the next two years.

But the lawmakers only gave their consensus on basic ideas that the two parties have already agreed upon.

They have not yet settled on rules for floor composition, the exact period of the provisional session and the especially contentious issue of how to investigate the ferry disaster.

“The bill for permanent special independent counsel goes into effect on Jun 19,” said Lee, “which says that a special investigation is launched when the prosecution’s impartiality is compromised or the lawmakers vote it through at the National Assembly regular sessions. So we agreed that we should finalize composition of the National Assembly as soon as possible”

“I have agreed because we may take a vote on a special committee on investigation of the government at the regular session scheduled for next week,” said Park.