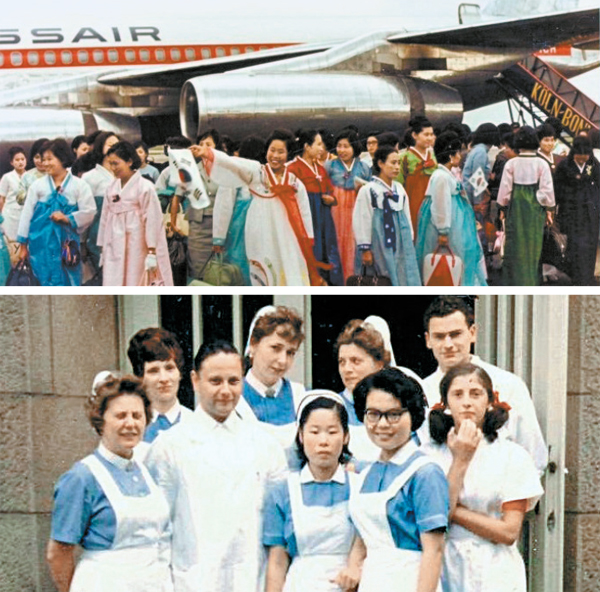 Top: Kill-ja Werner, now 69, waves the Korean flag upon landing at the Koln/Bonn Airport in Germany to work as a nurse in 1966. Bottom: A young Werner, center, poses for a photograph with German colleagues. Provided by Kill-ja Werner

It was a cool autumn day in September 1966 when Kill-ja Werner, 69, then a 21-year-old nurse from Korea, got on a plane to West Germany. Three of her colleagues from nursing school, who were among about 10,000 young Korean women sent to Germany as nurses, left at the same time.

On that day, young Werner, who back then still used her Korean surname Yoo, wore a brand new red and white hanbok, or Korean traditional dress, and felt “a slight thrill and slight fear at the same time” about beginning a new career in a foreign country.

At first, Werner’s parents were hesitant about sending their young daughter 5,322 miles away from home. But they allowed her to go because it was “for the country.” During the same period, thousands of young men also left for Germany to work as miners, under a Korean-German labor recruitment agreement made in 1963.

As of 2012, the latest official statistics from the Ministry of Foreign Affairs state that there is a Korean diaspora of about 7 million across the globe.

Many Koreans who settled down in foreign lands more recently say they did so because they wanted a better environment for their family and English education opportunities for their children. But back in the 1960s and ’70s, many young Koreans, like Werner, left to help funnel foreign currency into their war-torn country, to support economic development under the leadership of then-President Park Chung Hee.

“It’s as if it were yesterday when I waved the Korean flag as I got off the plane at Koln/Bonn Airport in Germany,” said Werner, looking back to 48 years ago. “The Germans treated us with respect and sincerity, but many of us were terribly homesick from time to time, staying up all night to cry and console each other.”

The Korea JoongAng Daily interviewed Werner, who now lives in the German Village in Namhae, South Gyeongsang, to hear about her life as an alien laborer in a foreign country and as an outsider in her home nation. Werner married a German man while living in Germany and now lives in Korea with German citizenship.

“Many Koreans who went to Germany often think about our home country and imagine what it would be like to go back,” said Werner. “But most of the time, it remains a dream.”

Werner explained that she was one of the lucky ones who received a chance to purchase a plot of land in one of the southernmost points of Korea. A village was being established to encourage Korean workers and their German spouses to retire on the peninsula.

“Then-county governor Kim Du-gwan came to Germany to tell us about the establishment of this new village,” said Werner. “It was appealing to us. The government offered land at a cheap price and construction subsidies.”

Korean nurses and miners who had lived in Germany for at least 20 years were allowed to apply for a lot. Those who obtained the opportunity were required to build German-style houses in the village with white walls and red-tiled roofs. It took five years for Werner to build Villa Colonia, the former nurse’s Korean home and a lodge for visitors to the village.

“My friends were really jealous when I got the opportunity to build a home in Korea,” said Werner. The three colleagues who went to Germany with her are still there.

“I guess they all have the longing to come back, but it’s difficult to do so. They’ve all settled down in Germany and have families there, so it’s not easy for them to leave. It was a little easier for me because I built a home in Korea, too. My husband and I go back and forth between the two countries.”

Werner said she spends about three months in Germany and the rest in Namhae, enjoying her days near the sea and the mountains.

“It’s a great place to live,” said Werner. “It has a great view and is situated right next to the ocean. And I like the climate here. It suits me.”

Werner said she likes being in Germany but that she enjoys meeting new people who come to stay at Villa Colonia. Yet she has faced difficulties adjusting to her native land after four decades of separation.

“I came back to Korea after about 40 years, and the first thing I found difficult was the language,” she said. Werner used to live in Suncheon, South Jeolla, which has its own dialect. “I used to speak the dialect fluently, but I’ve forgotten a lot, and it is still quite difficult to understand others speaking dialect,” Werner said, adding that she also has trouble expressing her opinions fully, especially in front of strangers.

“When I first went to Germany, all Germans looked the same,” said Werner. “But now all Koreans seem to look alike. I’m really a foreigner. It’s funny to feel that way in my own country.”

Werner said there are many other instances when she realizes that she’s a foreigner.

“I know I have foreign citizenship, yet I believe I am a Korean as well,” said Werner. “But it’s sad that I can’t get proper welfare benefits like other Koreans.”

Werner would like to receive benefits such as free public transportation use, which is usually given to Koreans who are over 65 years old.

“There are many other inconveniences of living with a foreign passport in Korea,” said Werner. “But I’m old, so I choose not to deal with them. But for younger generations, it will be great if some regulations change for Koreans who come back to their home country, like getting health insurance. I don’t have national health insurance in Korea, so I should be careful not to get sick while living here.”

Werner has thought about getting dual citizenship, which those over age 65 can apply for, but she has decided not to because “the paper work is too complicated.”