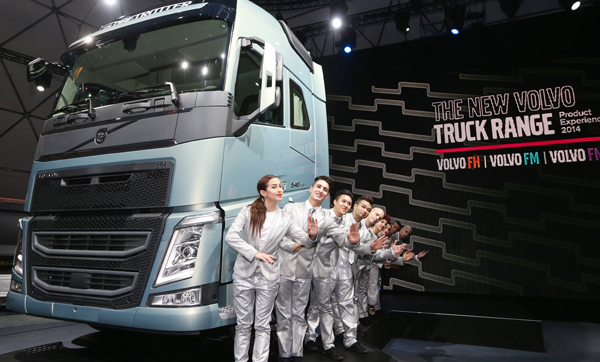 Volvo Trucks’ flagship model FH is introduced along with the FM and FMX at an Asia-Pacific launch ceremony in Seoul yesterday. [NEWS1]

Volvo Trucks is making a push to expand its presence in Asia, with Korea leading the way, as the company unveiled three new models yesterday.

The Sweden-based heavy truck manufacturer introduced to Asia new versions of its commercial heavy trucks - FH, FM and FMX - at the Walkerhill Hotel in Seoul.

Volvo said that this trio of trucks has been the largest investment in the company’s history, costing $3 billion, 14 million engineering hours to develop, and 21 million kilometers (13 million miles) of test drives.

The company said it decided to hold its Asia launching ceremony in Korea because it is the largest market and also the “most demanding” market in Asia.

“In terms of innovation, Korea is the top and we are here to drive innovation,” said Christophe Martin, senior vice president of Volvo Group Trucks-Asia Oceania. “Korean customers are the most demanding in this part of the world and we like demanding customers because they help us to grow and advance.”

Hyundai Motor, the nation’s top automaker, has the largest market share for heavy-duty vehicles in Korea, but Volvo is confident that it will be successful with its trucks. Volvo said the trucks are equipped with Volvo dynamic steering (VDS), which delivers handling similar to a passenger car, and the Dynafleet system, which tracks fuel consumption over time.

Volvo said that its goal is to become the No. 1 truck brand in Asia. The company has been doing business here since 1934, and is now present in 25 Asian nations and operates four production facilities.