Chung will run for Seoul mayor

Chung will run for Seoul mayor 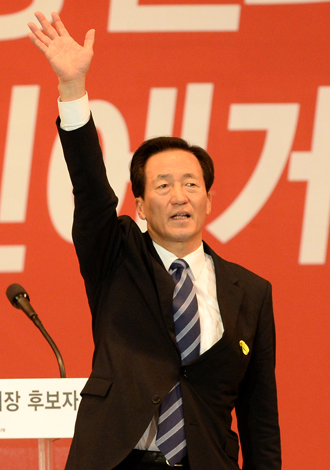 Chung Mong-joon waves to supporters yesterday after he won the Saenuri Party’s nomination for the Seoul mayor race. [NEWS1]

The former presidential hopeful clinched his party’s nomination by winning a landslide in a primary held at the Olympic Hall in Olympic Park, Songpa District, southern Seoul, yesterday.

Of the 3,198 votes Chung won, 2,657 were from party members and 541 were from voters who were not members of the Saenuri Party.

“I assure you that I will take back Seoul and apply the vision and dreams [of fellow citizens] to city policies,” said Chung in an acceptance speech.

The three-way primary race received a lot of attention as the Saenuri Party tries to wrest control of Seoul away from the opposition New Politics Alliance for Democracy.

That became a tougher task in the wake of the Sewol ferry tragedy as the public has blamed the ruling party for its poor response to the rescue.

Chung will challenge sitting Mayor Park Won-soon of the NPAD in the June 4 election.

The Saenuri Party and the NPAD have completed primaries for all but one of the 17 metropolitan and provincial governor seats.

The NPAD will nominate a candidate for the North Jeolla gubernatorial election today.

The Saenuri’s nomination for Seoul came a day after the NPAD nominated Kim Jin-pyo to run in the Gyeonggi gubernatorial election. He will face off against the Saenuri’s Nam Kyung-pil, who won the party nomination Saturday.

For the Incheon mayoral election, sitting Mayor Song Young-gil of the NPAD will fend off challenger Yoo Jeong-bok of the Saenuri in his re-election bid.

Yoo, a former public administration minister and a longtime aide to President Park Geun-hye, is thought to have joined the race largely at the request of the Saenuri to boost its chances of victory. Yoo left his ministerial job in March for the election. 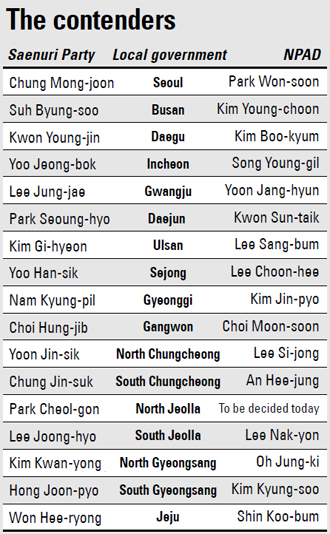 The two parties have slowly come into campaign mode this year because of the sinking of the Sewol on April 16, which left 304 people dead or missing.

The issue of the government’s handling of the tragedy, especially the rescue efforts in the first few days of the disaster, has become the focal point of the campaign, which is turning into a litmus test of the performance of the Park government.

Before the Sewol crisis, the ruling party hoped that it could make the most out of President Park’s high public approval ratings, leaving the rival NPAD little room to maneuver.

The country’s first female president enjoyed an approval rating well over 60 percent prior to the Sewol sinking.

The Saenuri’s hope for an easy victory began to erode in the aftermath of the disaster.

In a poll of 1,506 adults nationwide conducted from Wednesday through Saturday by opinion researcher Realmeter, the approval rating for the Saenuri Party went down by 5.4 percent from a week before to 38.1 percent - marking the first time in 19 months the party had a number in the 30 percent range. Park’s popularity also dropped by 1.1 percent to 51.8 percent. The survey has a margin of error of plus or minus 2.5 percentage points.

The fact that rescue teams failed to find and save a single passenger on the Sewol after the day of the accident has enforced a lack of public trust in the government. Poor communication between the government and passengers’ families in the first few days and poor government oversight of the shipping industry also worked to downgrade Park’s popularity.

The Saenuri Party now worries it may lose important metropolitan and provincial seats, namely Seoul and Gyeonggi, to the NPAD.

The opposition is not without its problems. The NPAD’s unilateral decision to field Yoon Jang-hyun in the Gwangju mayoral election has sparked internal feuds. It is speculated that liberal superstar Ahn Cheol-soo handpicked Yoon, raising the ire of former Democratic Party members

Representative Lee Yong-sup, who intended to run in the primary to represent the NPAD, left the party to run as an independent, a move that has raised questions about Ahn’s co-leadership of the party. Clinching an NPAD nomination for Gwangju promises a victory in the election, since the city is an opposition stronghold.

The opposition will frame the local elections as a chance for the electorate to punish the Park government for its failure to prevent the Sewol disaster and save more passengers.

“The basis of the Saenuri’s policy line has been to protect President Park Geun-hye from the fallout of the Sewol crisis,” said Representative Choi Jae-cheon, who heads the NPAD’s campaign strategy team, Sunday at the National Assembly. “We have no choice but to point at the lack of competence, responsibility and common sense of the Park government [in responding to the Sewol sinking].”

Political observers say the electoral battle has become tougher for the Saenuri because of the Sewol fallout.

“The opposition’s argument seems to be resonating among undecided voters in regions outside of the Gyeongsang and Jeolla regions,” said Cho Kwang-hwan, head of the political consulting firm Makers 10. “Criticism against what is perceived as the incompetence and lack of common sense of the government have put the ruling party at a much more difficult position compared to the pre-Sewol crisis.”