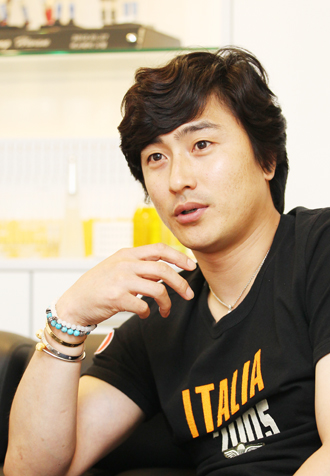 Ahn Jung-hwan was an icon in Korean football. With movie-star good looks and a marriage to model Lee Hye-won, he was the David Beckham of Korea in the early 2000s. But in Korean World Cup history, he was a whole lot more.

Many people still remember Ahn’s thrilling extra-time golden goal against Italy that led the Taegeuk Warriors into the quarterfinals in the 2002 Korea-Japan World Cup, and his stunning mid-range shot against Togo in a 2-1 first-round victory in 2006 in Germany.

During the 2014 Brazil World Cup, the 37-year-old will be a commentator for a local television network and an analyst for the JoongAng Ilbo. Ahn sat down to talk about the greatest sporting event in the world.

Q. Many fans and analysts criticized Coach Hong Myung-bo for breaking his own rules in finalizing his World Cup roster.

A. I know there are many different opinions, but I think those people criticizing Hong should take a look at themselves first. We know that the right to select players is the sole responsibility of the coach, and trying to influence his decisions is also breaking the rules. Since it’s only 30 days before kickoff, we should stop making such noise and give the team our best support. We can criticize him when the event is over. He knows that all the responsibility is on him as the coach.

Hong previously said he would not call up players who didn’t play enough for their clubs, but some players such as striker Park Chu-young and defender Yoon Suk-young were included on the roster.

Hong never said he would utilize Park as a starter. He might use Park as a joker, who can score a goal late in a match. If he isn’t in top shape, Kim Shin-wook [Ulsan Hyundai Tigers] can be the starting striker. But in my personal opinion, it looks like the coach wasn’t able to find a striker who could perform better than Park has in the past year. There are other players who can score, such as Son Heung-min [Leverkusen] and Lee Chung-yong [Bolton Wanderers], but they are midfielders. Park asked fans to take some time and watch how he plays, and I think we should listen to his request.

Hong chose 12 of his so-called London Boys, who were members of the 2012 Olympics team that won the bronze medal. Some say he just wanted familiar faces.

There is nothing wrong with that. He picked them because he trusts them, and I think it now is up to them to repay him for that trust.

If you were Hong, would you select Park Chu-young?

Indeed. But if I were the coach, I would utilize him as a substitute. When I was a member of the 2002 World Cup squad, I wasn’t a starter for my club [AC Perugia/Italy], but Coach Guus Hiddink gave me a chance and I responded to the expectation.

Korea had many veterans in the 2010 South Africa World Cup, but Kwak Tea-hwi is the only player over 30, and people worry about this.

I think age doesn’t matter. The more important thing is experience. It is true that the team consists of many young players, but many of them have experiences in European leagues and in international events like the 2012 Olympics. That’s why Park [Chu-young] needs to be a leader in the locker room as this will be his third World Cup.

What are your predictions for Group H matches against Russia, Algeria and Belgium?

I think teamwork will decide the result of the match against Russia, and many people say Algeria is the country from which Korea should earn three points easily, but I disagree as the Algeria team consists of many players from European leagues. The best scenario is for Belgium to win their first two matches and hope they don’t utilize their best 11 players in the last match with us.