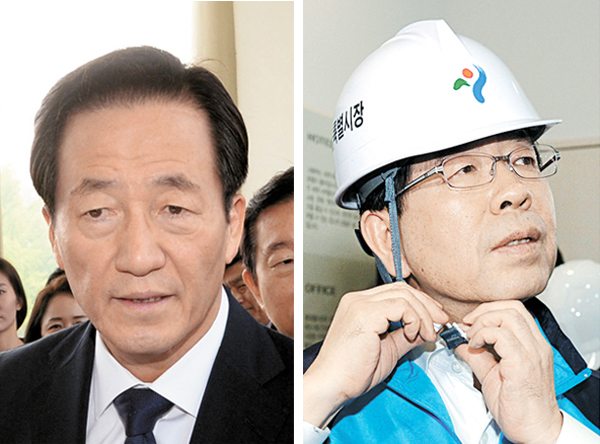 A day after he won the Saenuri Party nomination to run in the Seoul mayoral election, Chung Mong-joon launched his offensive against sitting Mayor Park Won-soon, in a signal of what is likely to become an intense race for the city’s highest office.

In a radio interview with CBS yesterday, the seven-term lawmaker said that Park, of the New Politics Alliance for Democracy (NPAD), carried out self-serving policies rather than those that would improve Seoul citizens’ well-being.

“Mayor Park Won-soon worked hard over the past three years. But he only worked for policies that he liked [personally] instead of carrying out policies that Seoul residents wanted,” Chung said. “Since Park took office, vital construction projects in Seoul have generally been delayed by two years.”

Pointing to the train collision on May 2 on Seoul Subway line No. 2, the Saenuri candidate insisted that Mayor Park had neglected the importance of safety readiness, adding that the incumbent politician had slashed the 2.34 trillion won ($2.2 billion) in city funds earmarked for enforcing safety regulations by 100 billion won.

In a follow-up interview with CBS, Park fired back at his opponent and criticized Chung for throwing verbal barbs out of line.

“The Seoul mayoral race may be challenging, but it should not allow verbal bashing out of line,” he said. “I have always attempted to solve the problems facing ordinary citizens with a public mind-set.”

The conservative contender’s campaign team appears to be framing the race as the choice between Chung, a candidate who will make genuine efforts to improve the city, and Park, whom they have tried to portray as someone who is focused solely on his own interests with little to show for it.

Chung’s team also pointed out that Seoul’s economy has been stagnant under Park’s helm, which it attributed to the incumbent mayor’s lack of vision for economic development.

To that end, it unveiled a package of 64 campaign pledges, most of which cover building new infrastructure in the capital’s northern areas, such as underground roadways.

The Seoul mayoral election is the most-watched race in the local elections due to the political significance it carries for the ruling and opposition parties.

It is highly anticipated that Chung would use his term as Seoul mayor as a springboard for the 2017 presidential election - though he has repeatedly maintained that he will carry out a full four-year mayoral term, to last through June 2018.

Park’s chances for the country’s highest office will also rise should he be re-elected on June 4.

The Saenuri contender currently faces an uphill battle, however, with the gap in popularity ratings between him and Park at more than 15 percent. In a survey of 1,084 Seoul residents 19 and over, Park led with 45.9 percent to Chung’s 30.5 percent.

The survey, conducted from Friday to Monday by the Hyundai Research Institute, has a margin of error of plus or minus 3 percentage points.