Still losses, but outlook for shippers is improving

Still losses, but outlook for shippers is improving 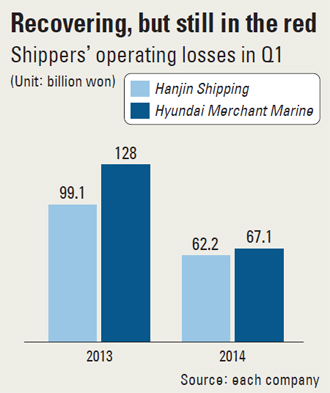 Korea’s top two marine shippers, which are suffering from a liquidity crunch, posted better first-quarter performances than a year ago but still failed to escape from the red.

Hanjin Shipping, the nation’s largest shipper, announced that it posted an operating loss of 62.2 billion won ($60 million) in the first quarter, 36.8 billion won, or 37.2 percent, less than in the same period last year.

The company, which celebrated its 37th anniversary yesterday, said the main reason for the improvement is because of reduced fuel costs. The shipper, under new CEO Cho Yang-ho, said its fuel usage in the first three months dropped 15.1 percent year-on-year, while the payments it made plunged 5.2 percent compared to a year ago.

Hanjin’s sales dropped 7.6 percent year-on-year to 2.15 trillion won in the January-March period. Although the company’s volume of shipments increased slightly, a freight drop for containers has pulled down overall sales, it said. The company added that its net loss in the first quarter was 224.5 billion won, mainly due to deficits from the sale of old vessels.

Even though the companies showed improved first-quarter results, analysts said there is still a long road ahead as both are under a debt-restructuring plan after underperforming for the last three years.

But the shippers said they are looking ahead at a better second quarter as the market is improving. The companies said their plan to sell assets and capital increases will show results.

“For container business, we expect improvement as business peak season is coming, while shippers are trying to raise freight and solve oversupply problems by scrapping old vessels,” a spokesman from Hanjin said.

Meanwhile, No. 3 shipper PanOcean managed to make a profit. PanOcean said it had an operating profit of 49.7 billion won in the first quarter, its first time in three years to stay in the black. The company filed for court receivership last June because of a liquidity crisis.