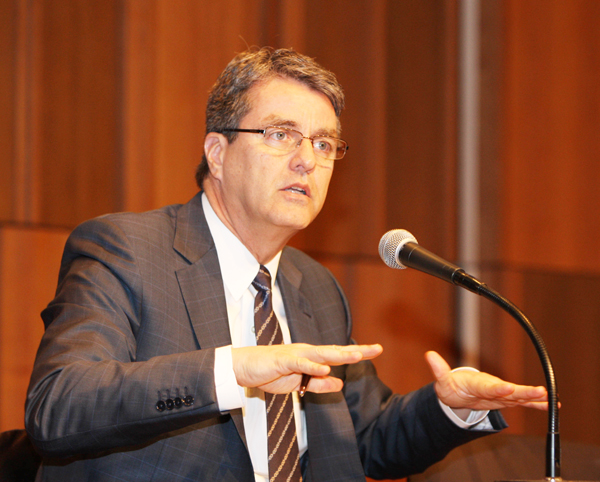 Roberto Azevedo, director-general of the World Trade Organization, says he’s a bit worried about how devaluations of currencies in many countries will affect global trade.

In an interview with the Korea JoongAng Daily during his first visit to Seoul since taking office last September, Azevedo, who is a Brazilian career diplomat, said his organization has started discussing the currency issue in a working group in order to take seriously competitive devaluations of currencies in many countries and how that affects trade flows.

“There is a working group on trade, development and finance that is looking at this issue about currencies and how it affects trade, and whether or not the WTO should do something,” the director-general said. “But that conversation is inconclusive.”

Azevedo’s basic stance on the currency issue is that it is a case-by-case issue.

“The way that the currency behaves with regards to other currencies changes from country to country,” he said. “The dollar doesn’t go up for everyone. And it doesn’t go down for everyone.”

The new WTO leader said it was important to see the fundamentals behind the macroeconomic policy of the United States because that affects the attractiveness of the dollar for investors and different countries.

Most of the time, variations in foreign exchange rates follow economic fundamentals determined by implementation of a particular government policy, he explained.

The new global trade chief is a strong supporter of multilateral trade.

Azevedo said he will spur efforts to put the long-stalled Doha Development Agenda negotiations back on track. He celebrated a successful ninth WTO Ministerial Conference on DDA negotiations in Bali in December, in which the 159 WTO member countries agreed on 10 items including reducing barriers that distort trade, and praised Korea for contributing to the success.

“Korea has been a strong supporter for the Bali package, and we expect it to continue to play a crucial role in the future,” he said. In a lecture hosted by the Institute for Global Economics in Seoul on Friday, he expected Korea in particular to help bridge the developing countries with the advanced countries.

“Korea is an inspiration to many developing countries because it faced huge challenges when it started the process of industrialization, and still it manages to be in a position today that shows this is possible,” Azevedo said in the interview, held later in the day. “It somehow kept the right ingredients, right recipe, and did things properly.”

“They’re two different things, like apples and oranges,” he said. “And they are complementary to each other.”

According to his explanation, free trade agreements mostly talk about border arrangements. They deal with tariffs or quotas that are applied between the two countries with some degree of discipline in the level of mutual recognition or standards.

“In the multilateral trade system, you never go as far as bilateral,” he said.

“But the WTO also regulates what happens beyond the borders. So if you are going to negotiate on anti-dumping or safeguards or countervailing moves, you have to do it multilaterally.”

“If you are going to negotiate subsidies, no matter what kind of subsidies - industrial, agricultural, or fisheries subsidies - you have to do it multilaterally. You can’t do it bilaterally,” he added.

Bilateral or regional trade agreements between economic blocs are not sufficient by themselves, because they could marginalize developing countries.

The WTO head carefully forecast that global trade volume would increase 4.7 percent this year and 5.3 percent next year.