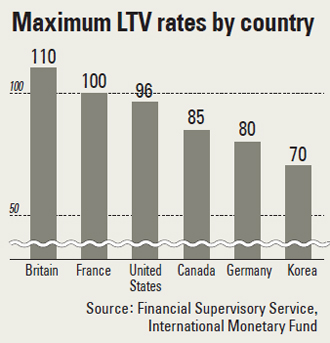 Despite increased efforts by the government to ease regulations in the housing market, a state-run economic think tank report says the loan-to-value ratio regulation - one of the strongest and most controversial constraints on the market - should be retained.

The Korea Development Institute under the Ministry of Strategy and Finance said in a report yesterday that a study easing the LTV regulation at the moment could send household debt surging and burden the macroeconomy.

Song In-ho, a research fellow at the institute, said in the report that easing the rule would cause the current debt level to spike again and make the national economy more sensitive to external factors.

If the LTV ratio climbs from 50 percent to 60 percent, national housing prices would inch up by 7 percent. At the same time, household debt as a share of GDP would rise 2 percentage points, the report showed.

Song, however, emphasized that if the LTV rule exceeded 60 percent, the household debt-to-GDP ratio would fluctuate even more, causing greater economic uncertainty.

The researcher said the Korean LTV rate is not as high as advanced countries.

Those of Britain, the United States and France are hover around 100 percent, according to the report.

The Park Geun-hye government has taken action to ease loan regulations imposed by the Roh Moo-hyun administration to revitalize the moribund property market, which has been a major drag on the country’s economic growth.

The LTV rate is a gauge used by banks to determine the maximum amount of a mortgage based on the price of the house. The rate varies by city, but the average is 50 percent for Seoul and its metropolitan areas, and 60 percent in rural regions.

The Park government plans to increase it for young and low-income borrowers to 70 percent.

“Although compared to the advanced countries the Korean LTV regulation is quite conservative, due to the high jeonse deposits these days in the country, the rate cannot be considered low,” Song said.

He added, given the recent average jeonse prices, an appropriate rate would be 49.4 percent across the nation.

“At this moment, it is not the right time for the government to ease the LTV ratio,” the researcher added. “Household debt is a serious problem for the Korean economy and easing the ratio could aggravate the current debt issue.”