Inside the mind of a ‘crazy architect’

Inside the mind of a ‘crazy architect’ 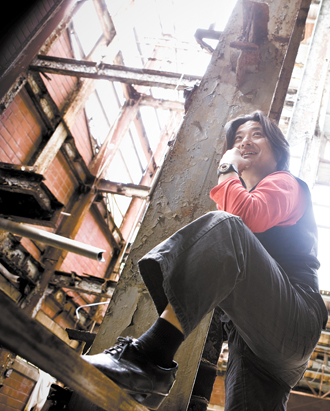 Three hours from Seoul by car in Sangdong Town, Yeongwol County, Gangwon, is a deserted factory with rundown walls, broken windows and safety helmets scattered on the ground.

But because of the huge structure’s concrete walls contrasting with the mountainous backdrop, and the plant’s high-standing chimney installed next to it, the abandoned area looks almost grandiose. The plant was a global tungsten mine in the 1960s, where it used to generate 70 percent to 80 percent of the nation’s total exports of metal.

However, in the 1980s, when domestic tungsten was ousted by Chinese products due to their cheaper cost, the mine’s operation came to a halt and the village’s population, which used to be about 20,000, shrank to 1,000.

Architect Moon Hoon spent his youth at Sangdong with his father, who was an on-site inspector at the local Korea Tungsten Company factory. 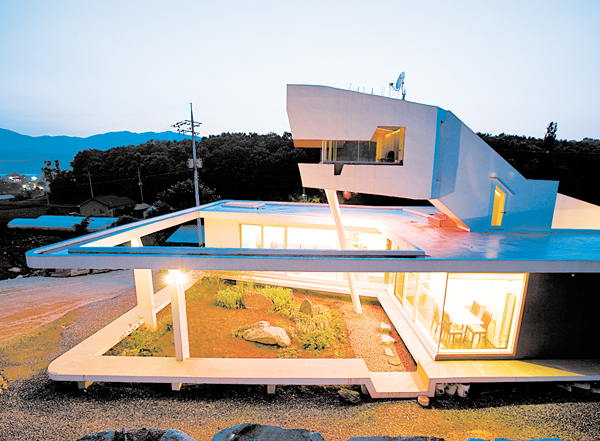 Moon’s most memorable work. Architect Moon Hoon designed about 50 buildings in his career, each of them bursting with their own uniqueness. The JoongAng Ilbo asked him to pick three of his favorites. 1. S-Mahal. In this Yangpyeong, Gyeonggi-based house, Moon merged the garden of a hanok (traditional Korean house) with a toenmaru (a wooden porch installed on a wall’s exterior). The upper part of the house, which pokes out above the rest of the building, is a prayer room. The home is often called “wandering house.” By Park Chan-woo

“Back then, it could be compared to today’s industrial complex in Ulsan,” Moon explained, while guiding a reporter from the JoongAng Ilbo, an affiliate of the Korea JoongAng Daily, around the area on May 11.

“It used to be huge. But now I feel the frailty of time. Factories are architecturally very attractive. They take out all decorative factors and only focus on the function. It’s like the taste of sashimi.”

In the design industry, Moon goes by the nickname “crazy architect,” because he takes unprecedented approaches to his work. He once installed horns and a tail on a building and constructed a house to look like an inchworm. “Just imagine. Any kind of building you want, I can make it,” the architect said.

In Moon’s recently published architecture-themed picture book, “Doodle My Way To The Moon,” there is a paragraph that reads, “In my younger days, I used to draw a lot of pictures of my neighborhood. Maybe I was conceived as an architect then. The part I cannot remember now I fill it up with my imagination. I don’t lament over what is lost. I enjoy restoring the gap in my own way.”

The book is a compendium of Moon’s imagination. Architectural possibilities that he has only ever been able to dream of are freely expressed in the book, as if it is an illustrated diary. Some parts of the publication resemble a series of sci-fi movie stills, like when a jeongja, or a small pavilion, is connected with a humongous, futuristic bridge, or when a mushroom-like mansion floats in the sky. 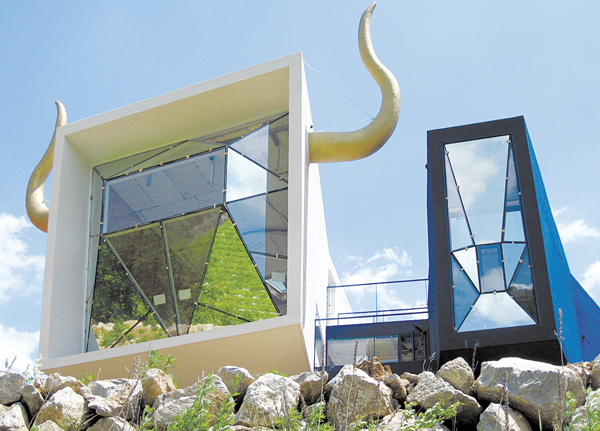 2. Rock It Suda. Rock It Suda is a cluster of pensions located in Jeongseon, Gangwon. Upon the request of the owner, who wanted to make the building look Spanish, Moon installed a set of horns inspired by bullfighting. It has become a building that represents Moon’s unusual aesthetic.By Moon Hoon

Pictures from his new work, as well as 40 other illustrations drawn by Moon, will feature at the Korean Pavilion in the 2014 Venice Architecture Biennale that launches June 7.

Here are some excerpts from an interview with the designer.

Q. How did Sangdong Town influence your architectural world?

A. It looked like a space town when I was young. The chimneys were huge and the vertical built-in ore carrier at the foot of the mountain looked so surreal. I feel sorry that the mine is shut down, but now it has turned into an aesthetic object.

Do you enjoy being outrageous?

Not really. I’ve been to a lot of different places and went through various cultural experiences. When I was a middle school student, I followed my dad to Australia and lived on the island of Tasmania. I studied architecture at Inha University and finished my master’s degree at Massachusetts Institute of Technology in the U.S. Having lived in Korea, as well as many other foreign countries, and gone through all sorts of experiences, I came to realize that nothing is absolute in this world.

How do you feel about your reputation for being “childish”?

I want to live my life as youthfully as possible. As you can see from my recent book, robots, spaceships and battleships appear frequently. Whenever I have time, I pick up my pen and let my imagination fly. It will be hard to make my ideas come to life right away, but I believe that they will become the foundation of my future architecture. 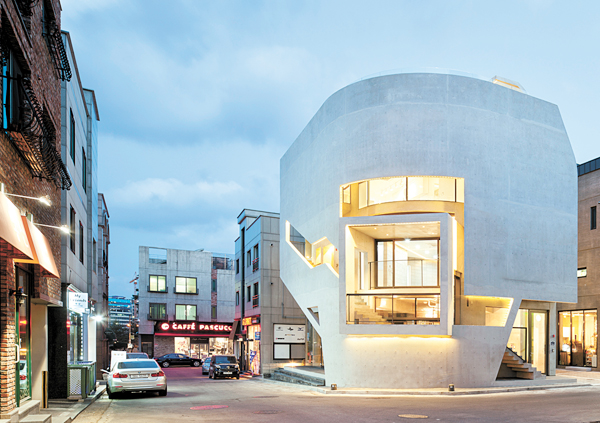 3. K-Pop Curve. These offices of a music production agency, K-Pop Curve, were completed last month in Pangyo, southern Gyeonggi. Moon adapted the building to fit with the corner of the road intersection. The construction also has a stairway that wraps around the curvy building, which leads to a rooftop that is used as a small theater.By Namgung Sun

What did you learn in Australia?

I saw an alternative way of life. Every Friday, people seek out something fun to do or places to hang out at over the weekend. It seemed so new to me, even when I was young.

There were times when I was treated unfairly, because I was a foreigner, but my experiences abroad made me realize that there are many options in life. How agonizing it would be if one’s objective was confined solely to success or money. It is the same with architecture; there are many dimensions.

How was studying in the United States?

When I received an architecture prize at Inha University, I was proud of myself. But this was wrong. Students in America were already aware of Lao-Tzu or Chuang Tzu [ancient Chinese philosophers] and were experts in their fields. I developed my architectural identity there.

How do you feel about participating in a biennale for the first time?

I have been introduced in overseas magazines several times in the past, but this time it is a little different. I am curious to find out how people will react to my work. In the past, I have been evaluated as being very Korean.

Why do you think that is?

There are many natural factors such as the wind, energy and clouds in my works. When people haven’t seen these things [in design work] before, they think they are influenced by Korea.

Why do you frequently implement images of jeongja in your work?

What do you think is the reason for the latest trend of building small houses?

It is because apartments no longer make money. It is a positive thing that a new wave is blowing in the standardized housing culture of Korea. But since land prices in Seoul are so expensive these days, building detached houses won’t be easy. Transforming a shanty town into a collective housing area full of small-scale houses could maybe be a good idea.

Is there “good land” for building houses?

No such thing exists. I like irregular landscapes. The more crooked the land is, the more I challenge myself to build extraordinary houses. Living a free life is the best, isn’t it?

Wouldn’t this be a disadvantage when you try to sell it later?

Nobody marries with the thought of divorce in their minds. If you just give it a little time, the right owner will appear.

Then how come you live in an apartment?

Not all apartments are bad. I get a vicarious satisfaction from building many kinds of houses. If I was told to build my own house, I would want to build it on a cliff. How fun it would be to climb down a pole to have dinner. I want to live my daily life without being ordinary.