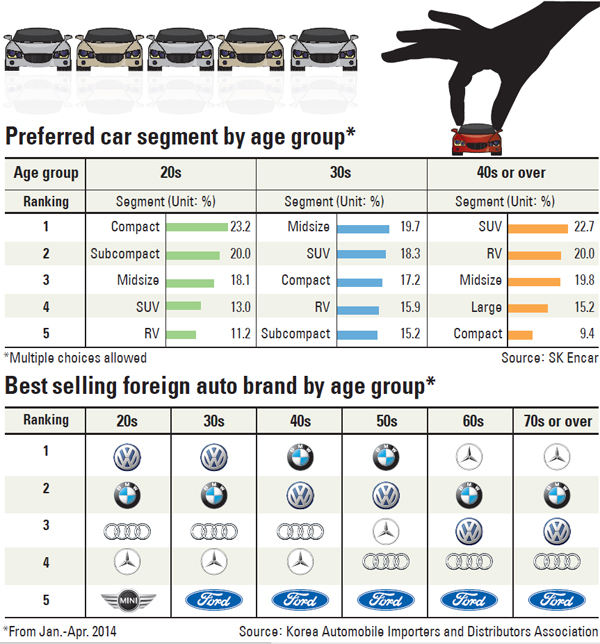 For those thinking about purchasing a car, it can be challenging to choose the right model. From design to price, there are lots of things to consider, but potential car buyers might want to take a serious look at what their friends are driving.

“There is clear difference in preferred car types depending on the buyers’ age groups, because each group tends to differ in their reasons for buying a car and who the passengers will be,” said Choi Hyun-seok, marketing director at SK Encar.

The company said it analyzed 2,871 consumers’ preferences in regard to car size through its Life Encar mobile application.

The app, which was released in July, recommends cars based on a person’s gender, age, residential area, budget, fuel type and other information.

SK Encar said people in their 20s prefer compact cars, while those in their 30s go for midsize models. Buyers aged 40 and over like sport utility vehicles.

“Since consumers in their 20s look for sedans when they buy their first car, compacts like Hyundai Avante and Renault Samsung’s SM3 are popular,” SK Encar said. “However, SUVs are less popular because they are more expensive.”

Among 30-somethings, midsize cars (19.7 percent) and SUVs (18.3 percent) were the top two preferences. Experts say people in their 30s like to buy midsize sedans that can comfortably carry four passengers, while SUVs are popular because they can be used for many purposes.

Consumers in their 40s and older picked SUVs (22.7 percent) and vans (20 percent) as their top selections, suggesting that older buyers like roomy vehicles with better visibility.

“Drivers who are over 40 look for SUVs as their second cars because they generally don’t face the kind of economic pressure that people in their 20s do,” SK Encar said. “More than 15 percent of this age group also picked full-size cars, compared to only 5 percent in their 20s.”

When it comes to imports, certain brands are popular with specific age groups. According to data from the Korea Automobile Importers and Distributors Association, Volkswagen was the top choice of buyers in their 20s and 30s, while BMW was No. 1 for people in their 40s and 50s. Mercedes-Benz was tops for those 60 or over.

Industry insiders say Volkswagen appeals to young people because it is priced lower than other German brands, and it offers a range of models and prices, from the Golf hatchback to the Passat midsize sedan.

“BMW and Mercedes-Benz also have several models, but prices are high,” said a Kaida spokesman. “However, luxury brands are trying to attract young customers by releasing small cars and marketing them though social events.”

For example, Mercedes-Benz has been pushing for younger buyers since the release of the A Class, its smallest car, last year. When the car was released, the company sponsored Ultra Korea, an electronic music festival, to burnish the brand’s image with young people.

Last year, 38 percent of import buyers were in their 30s, according to Kaida.

In fact, people in their 30s represented the largest share (22.3 percent) of all buyers in 2013, according to the Korea Automobile Manufacturers Association. While they purchased 277,081 vehicles last year, that was 6.5 percent less than in 2012.