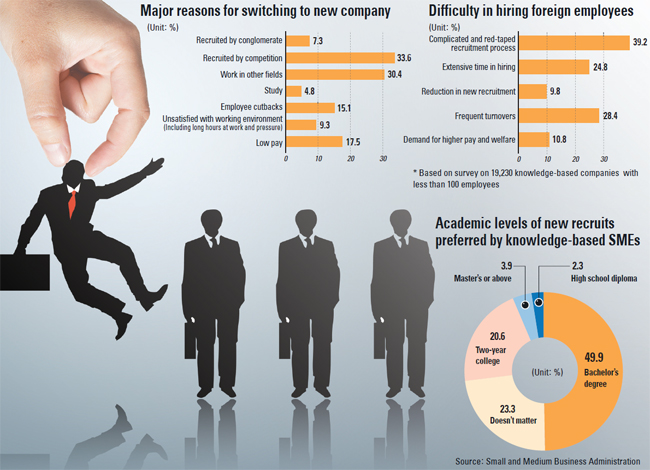 A former founder of a Korean app development start-up, who wished to remain anonymous, says one of the biggest challenges that he faced while running the company for nearly three years was finding financial backing and young talented employees.

“Most smart, young people don’t really want to work for a startup that’s only been around for less than a year or two,” said the former CEO. “Even the dumbest kids on the block all want to land a job at a major conglomerate like Samsung or Hyundai rather than taking a risk and facing a challenge in a company that’s barely known in the local market, even if it’s a hit overseas.”

The company, founded by four designers and engineers, developed a social networking app and launched it in May 2011. It became an instant success in Japan, quickly becoming one of the top five most downloaded apps in the country. However, the app was met with less affection in its home country, although it had quite a following.

That same year, the company released several smartphone games. It seemed as if the start-up was finally getting on track.

Although the games created a small buzz in the local IT industry, they failed to gain the mass appeal of Kakaotalk or Anypang, a game created by SundaytoZ.

Lacking the finances necessary to keep expanding, the company folded late last year but its apps are still available on Apple OS and Android apps stores.

This is not a rare occurrence in Korea’s IT industry, where start-ups constantly face a lack of talent.

A report released earlier this year by the Small and Medium Business Administration showed that as of May 2013, there was a shortage of more than 9,000 employees at knowledge-based small and midsize companies. That’s an employee shortage of 2.35 percent that the companies were hoping to hire. Technician shortage was the highest at 3.22 percent followed by 2.58 percent in sales workers and 2.53 percent in research and development employees.

The smaller the company size, the higher its need for workers was. At companies with less than 20 employees, the shortage of employees was 3.57 percent. Companies that had between 100 and 300 employees had a shortage of 0.83 percent.

In its survey of 19,120 knowledge-based small and midsize companies, the SMBA found that 62.5 percent of companies said the biggest obstacle in hiring was finding a new recruit with the required skills. The second-biggest problem, at 53 percent, was that no one wanted to apply for a job at a small to midsized tech company. A difficulty in finding possible recruits accounted for nearly 12 percent.

Finding technicians was the most difficult task for small and midsize knowledge-based companies. Finding office managers and researchers wasn’t easy either but relatively more people applied for those positions than for spots as technicians.

As a result, the average years that an employee spends working at a smaller company is less than at larger businesses, where workers often spend a decade or more.

Of the 400,000 people working at knowledge-based small and midsize companies, 46.9 percent stayed at the same company for less than three years. Those who worked for between three and five years made up 26.9 percent, while those who worked for more than 10 years only amounted to 7.3 percent.

Last year, the turnover rate was 11.5 percent with more than 46,000 people quitting their previous jobs for a position at another company.

Out of people who left their jobs, most (33.6 percent) were offered a job at a competitor while 7.3 percent were hired by conglomerates. Most cited low pay as their reason for leaving their previous job.

The pay is relatively lower than that of people who work at conglomerates. The average annual salary of an employee working at one of the nation’s top 100 companies was 71 million won. SK Telecom and Samsung Electronics’ employees on average took home more than 100 million won including annual bonuses. Even the annual paycheck of NHN employees exceeded 70 million won last year.

So how do Korean companies feel about hiring foreign employees? According to the government, only 6.5 percent of the 19,000 or so knowledge-based SMEs hired foreign employees. The biggest reason for hiring them was to save on human resources costs and due to a lack of interest from Korean applicants.

In many cases even Korean employees suffer from strenuous working hours and intense pressure at globally-accomplished conglomerates like Samsung Electronics.

“When my daughter told me that she got in at Samsung Electronics I was really proud,” said a Korean executive at a foreign company. “Nowadays I’m more worried as she leaves for work much earlier than me, comes home late and has no weekend.

“When being worked so hard, how would it be possible for people to come up with new ideas?”

A program engineer in his mid-30s participated in the development of Galaxy S4, but he said he then left the company because he didn’t want to miss out on his life.

“I’m not saying I had complaints when I was working there,” said the engineer, who asked only to be referred to as Kim. “Actually, I’m proud that I was part of the team that created Galaxy S4. But I was spending most of my times at the lab even on the weekends until the project met the scheduled date,” Kim added.

“I barely saw my son and with a second kid on the way it came to a point where I wanted to spend more time with my family. So after Galaxy S4 was launched, I left the company to look for a less demanding and time consuming job.”

Kang Joong-koo, a researcher at LG Economic Research Institute, said the strength of the service industry is that it has the power to create its own growth engine through the development of new products as has been proved by smartphones and 3D printers.

The continuous expansion of an innovative service industry would help boost jobs for young people, but they will only take the jobs if they are good.

“Currently the ability to create added value in the service industry is far lower than other industries and the labor productivity is known only to be one-third of that in the U.S,” the researcher said.

In other words, most Koreans are overworked, especially in the service industry and at knowledge-based companies. This is a huge difference from companies in Silicon Valley, which not only offer high-paying jobs, but have generous welfare benefits including training and time allowed to pursue personal projects.

“The environment is completely different in the Korean market,” said the CEO whose company folded late last year. “The four of us who created the company only slept two to three hours a day while developing the program. For such small company without huge funding, it’s not easy to create a relaxed working environment.”