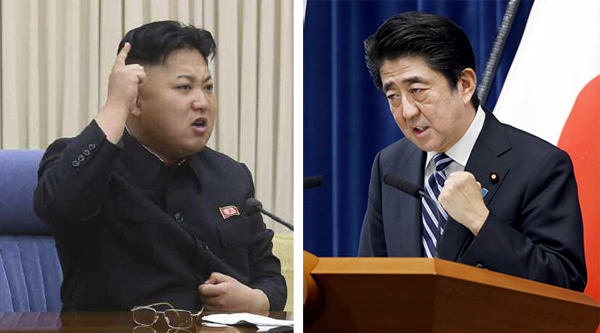 He is not talking about the North Pole and South Pole. “The far right and the far left are on the opposite extremes of ideologies, but one only exists because of the other.”

It is a hostile symbiosis. The existence of one gives a justification for the other. Let’s apply his argument on North Korea’s “military first” policy and Japan’s collective right to self-defense.

While Korea remains in shock from the Sewol ferry tragedy, Japanese Prime Minister Shinzo Abe made the collective right to self-defense official on May 15. He declared that the existing interpretation of the pacifist constitution is to be changed to allow use of force when its allies are attacked. At a news conference, Abe pointed to a panel that showed Japanese children onboard a U.S. warship under attack by an unknown aggressor, and used the threat from North Korea as a justification.

North Korea did not remain calm. The next day, the Rodong Shinmun claimed that Japan’s exercise of collective self-defense was the first step to overseas aggression. But when North Korea makes an official announcement, it always has implications. It very well could be groundwork toward conducting a fourth nuclear test, which it could now justify as “a self-defense move” in response to Japan’s aggressive ambitions.

North Korea and Japan have behaved similarly in the past. North Korea’s launch of Daepodong 1 in 1998 was the first event that alerted Japanese society to North Korea’s threat - the long-range missile flew over Japan. In response to Tokyo’s fury, North Korea’s Asia-Pacific Peace Committee insisted that Japan and many other countries possess and have placed missiles. In 1999, Japan’s defense ministry argued that the emergency guideline on Self-Defense Forces should be revised to ensure smooth operation at times of crisis, which became the beginning of its claim for collective self-defense rights.

In the 1990s, North Korea and Japan were both suffering. North Korea was experiencing a nationwide famine and economic failure. And when Japan’s asset bubble popped, the lost two decades began. Both countries tried to turn their eyes outside to comfort internal pains.

That puts Korea in trouble. North Korea is accumulating nuclear capacity larger than it can control. We need to discourage North Korea’s armament to keep the peninsula stable and urge Japan to sincerely reflect on history to stop its rightist swing.

If North Korea’s “military first” policy and Japan’s extreme conservatism are polar opposites, something must stop their dashes, whether it is appeasement and persuasion or pressure through the international community. While our nation mourns, the government must stay alert for what happens on the outside.