Start-up investors zero in on trends

Start-up investors zero in on trends 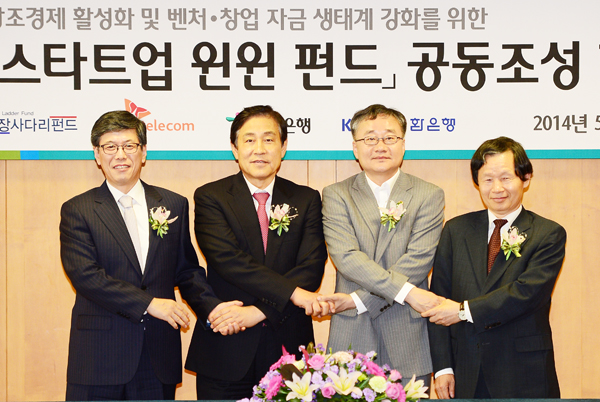 Earlier this week at the Federation of Banks headquarters in Myeong-dong, central Seoul, Hana Financial Group held a special event to announce 42 billion won ($40.9 million) worth of funding for start-ups along with SK Telecom and the government’s Growth Ladder Fund for start-up investments.

This is not the most money that has been given to Korean start-ups, but the investment is unique because it is the result of a collaboration among a private financial institution, a private business and the government.

The Growth Ladder Fund, which was launched in August, is operated by the financial oversight authority Financial Services Commission.

The joint start-up investment is the brainchild of Hana Financial Group Chairman Kim Jung-tae. In a meeting with President Park Geun-hye at the Blue House in December, the chairman told her that the success of a start-up is not just because of financial investment but also because of support such as consultation on technology, marketing, production design and financial management.

The “start-up win-win fund” will provide financial advice from Hana Bank or its affiliate Korea Exchange Bank, while SK Telecom will advise on technology, marketing and design.

Hana and SK Telecom will chip in 10 billion won each, and the rest will be covered by the government’s start-up fund.

“The government is doing its best, but there is a limit to the support we can offer,” said Chung Chan-woo, vice chairman of the FSC, who attended the launch. “The government could only support in the beginning while the private sector can aggressively extend their support [to start-ups].”

Since the Park administration began advocating for a creative economy, investment in start-ups has visibly increased.

But many companies are still struggling to get the financial backing they need because investors are either exclusively focused on the trends such as app development or they prefer to put their money into a less risky company.

A 40-year-old who started a company that manufactures smart keys for automobiles is among those who have had trouble securing investment.

The smart key developed by the company unlocks doors and automatically turns on the ignition. As sales were increasing, he needed to expand production and to ease his financial burden. So the start-up CEO went out to meet investors but had little success.

He was turned away because, the investors told him, in today’s IT industry, apps are the major trend.

He then developed an automobile-related app that provides information to the driver, including how much gas the driver has used.

Again, he sought financial aid from potential investors. But they still turned their backs, saying it would be too difficult to support him because his product was not a definitive moneymaker.

“I was expecting them to pass judgment on the potential of the technology, but they were putting the emphasis on past performances,” the CEO said.

A 53-year-old created and patented a tire-pressure monitoring system that tells the driver the condition of the vehicle’s tires. When he was seeking out investment for the development in 2012, investors were reluctant to back him, saying it would take too much time to regain their investment.

As of last month, there were 102 venture investment companies in Korea with 1.4 trillion won of investment to spare, according to the Korean Venture Capital Association.

The investments were mostly centered on information, communication and technology start-ups that created apps and software. Roughly 102 billion won was invested in such software development companies.

“The problem with running a small start-up is that investors here don’t have the patience to wait, so in many cases we end up borrowing from relatives and friends, and when that dries up, the start-ups’ management has no other choice but to seek out riskier loans with high interest rates,” said a start-up CEO who formerly ran a software company but has now switched to retail and services.

The CEO, who wished to remain anonymous, was an early participant in the start-up boom in the late 1990s, which started as Internet access spread. Although his business drew customers interested in related fields, it failed to attract average consumers. He said he had no choice but to change the course of his career, giving up the software business as his debt piled up.

“The government earlier this year promised a 4 trillion won investment for start-ups in the next four years as part of its three-year economic plan, but the question isn’t a matter of compiling investments but rather if start-ups will be able to get them,” the CEO said. “Venture capital and start-up investors first need to change their perceptions, Instead of looking to earn a quick buck, they should consider start-ups as a long-term investment. In time, the start-up could grow to a multibillion won business and the reward would be exceptionally large.”