How Putin won big in China

How Putin won big in China 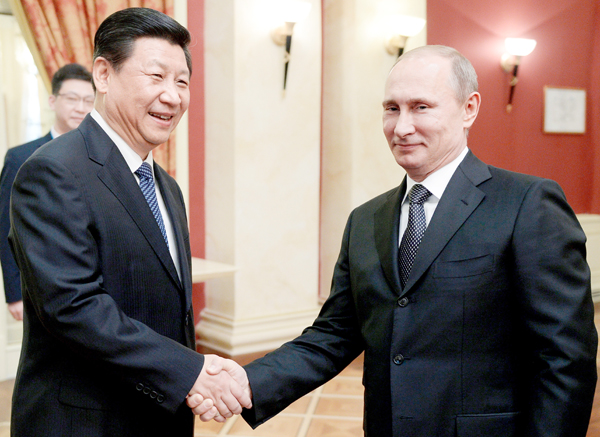 Russian President Vladimir Putin has achieved what Western leaders feared: He has cut a big, long-term deal to supply natural gas to China - a pivot to the East that makes Russia much less vulnerable to whatever sanctions the West might impose.

The gas contract had been 10 years in preparation, mostly because the parties haggled relentlessly over the price. The parameters of the deal made public by Alexey Miller, chief executive officer of Russia’s near-monopoly gas producer Gazprom, suggest the final price will be roughly $10 per million British thermal units. That is less than Russia may have wished for, but about as much as it makes sense for China to pay. Data from Platts suggest that the weighted average price of gas from Myanmar, Turkmenistan and Uzbekistan came to about $10.14 last year. This year, Gazprom expects to export its gas at the average price of $10.62 per million, but traditional consumers in Europe are trying to bargain it down.

Crucially, the deal opens up a major new market in case Europeans make good on their threat to cut their dependence on Russian gas supplies. China has signed up to import 38 billion cubic meters per year, more than its total 2013 pipeline imports (they reached 27.7 billion cubic meters) and about 20 percent of Russia’s 2013 export volume. China can easily take more, too. The country currently gets two-thirds of its energy from coal, which it is eager to replace with gas for environmental reasons. The current gas imports are a drop in the bucket compared with the potential market size.

Two more bonus points: It’s likely that China will help Russia finance the enormous infrastructure investment - estimated at more than $30 billion - required to uphold its end of the deal, and China will probably be paying in renminbi, making the deal safe from any Western sanctions.

A joint statement signed ahead of the deal sounds like an anti-Western pact. Echoing the Russian position on the Ukraine crisis, it contains this thinly veiled invective against U.S. and EU policies:

The parties stress the necessity of respecting nations’ historic heritage, their cultural traditions and their independent choice of sociopolitical system, value system and development path, of counteracting interference in other countries’ domestic affairs, of rejecting the language of unilateral sanctions, or organizing, aiding, financing or encouraging activity aimed at changing the constitutional system of another country or drawing it into any multilateral bloc or union.

Coupled with a spate of smaller contracts and agreements, this is all Putin could have wished for. China apparently sees no downside to strengthening its partnership with Russia. It is getting a reliable source of much-needed energy, calm along a 2,600-mile border and easier terms for companies wishing to invest in Russia’s vast natural resources. As for the West, it is dependent on China to produce its industrial goods and maintain a high level of investment in its public debt. Beijing is unlikely to suffer any political fallout from embracing Putin when he’s a pariah in Western capitals.

Putin, for his part, is virtually assured of coming out a winner from his Crimea adventure. The alliance with China allows him to crawl off into the reeds like a sated crocodile. He is no longer hungry, for the moment, and there is no immediate threat of total isolation. The only problem for him is that China is clearly the stronger partner in the alliance: The Beijing talks were politically much more important for Putin than for his Chinese counterpart Xi Jinping. Russia could end up China’s satellite if it does not at least partially rebuild a relationship with the West. That, however, is a problem Putin can deal with later.

*The author is a Bloomberg View contributor. He is a Moscow-based writer, author of three novels and two nonfiction books.