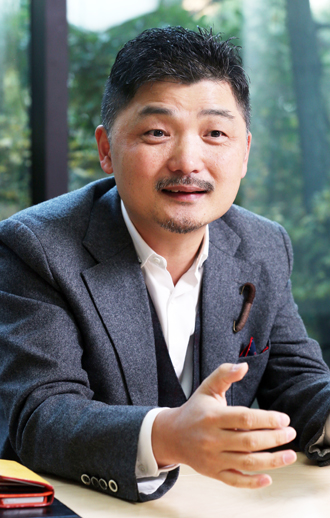 Kim Bum-soo, chairman of Kakao Corporation, is expected to join the so-called 1 trillion won club after his company’s merger with Daum Communications.

According to Chaebul.com yesterday, Kim is expected to become the nation’s fourth-largest holder of information technology stock by value after the merger of the nation’s No. 1 mobile messenger provider and the No. 2 portal company.

According to research by Chaebul.com, which writes about Korea’s conglomerates, Kim’s 8.08 million shares in Kakao will be worth 916.9 billion won ($895.8 million) after the merger.

After adding all of his shares from his venture capital company K Cube Holdings, the total value of shares he will own will be 966.4 billion won.

“When the share price of Daum Kakao rises on the local stock market, the amount of stock assets Kim owns is expected to surpass a value of 1 trillion won,” said an analyst at a local securities firm.

That will make Kim the nation’s fourth-biggest holder of stock in the IT industry, according to Chaebul.com.

The website’s survey also detailed a list of 10 IT start-up entrepreneurs who assembled more than 100 billion won worth of stock in businesses such as online games and Internet portals.

Kim Jung-ju, a major shareholder and chairman of NXC, was No. 1 on the list with 1.73 trillion won in IT shares. Kim emerged as a game industry tycoon with a series of successful online games such as The Kingdom of the Winds and Kart Rider.

Kim listed Nexon on the Japanese stock market while building up NCSoft as a global game company.

Following Kim are Lee Hae-jin, chairman of Naver, who owns 1.19 trillion won worth of IT stock, and Kim Taek-jin, NCSoft CEO, with 1.18 trillion won worth. Daum Kakao’s Kim Bum-soo is forecast to push out NHN Entertainment Chairman Lee Joon-ho from the fourth slot.

Kim founded an online game portal company called Hangame in 1998 and merged with Naver through an equity swap in 2000.

After the merger, Kim took charge of the game business as a co-head at NHN Corporation, the merged company of Hangame and Naver, but resigned in 2007.

Daum Communications and Kakao are expected to finalize the merger by the end of the year after receiving approval from general shareholders meetings in August.