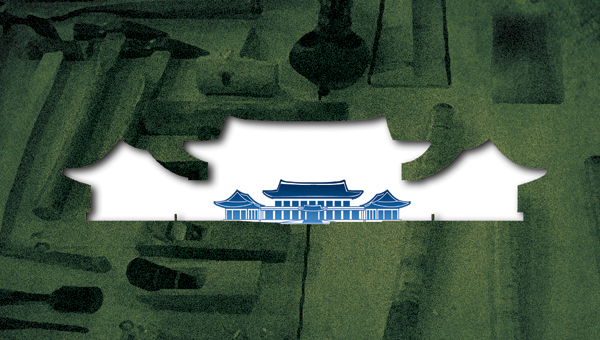 After Koreans went through the shocking Sewol ferry accident and the miserable handling of the rescue and the recovery of the bodies of fatalities, most agreed with the comprehensive, if abstract, calls for some kind of national rebuilding or reform. The government has a particular need for soul-searching as it is supposed to be responsible for the lives and basic safety of its citizens. As a result, the government has come up with plans to reorganize government agencies, including installation of a national safety office and dissolution of the Coast Guard, and to change the way in which it recruits its professional workforce.

The reorganization and the new recruiting system will be expanded to the government in general under the greater frame of national rebuilding.

Such an organizational reshuffle can be compared to preparing the tools necessary for a carpenter. There’s a saying that a bad workman blames his tools. But even a good carpenter cannot build properly without the right tools. Also, a good carpenter with a set of nice tools would do his best when he is promised appropriate compensation, including non-monetary rewards.

Therefore, the government reorganization and new hiring system will only be effective when the conditions that inspire changed attitudes and conduct from public servants, who are the carpenters, are prepared.

How can civil servants be provided with conditions to actively and faithfully fulfill their given duties?

First of all, it is important to establish a tradition of having the ministers appointed by the president stay in office through the administration as a matter of principle. Also, each minister should be given the authority to appoint the officials in his or her ministry. We cannot expect our civil servants to accomplish challenging tasks under the leadership of a succession of short-lived ministers without much power in their own right, especially over appointments. How can civil servants actively fulfill their duties when they are more worried about National Assembly and Board of Audit investigation without the protection of the minister? There are precedents of senior officials being reprimanded for counting on a short-lived minister and promoting his policies when the policy results ended up not being so successful.

Along with the government reorganization and systematic improvement of civil service hiring and compensation, the government reforms must include various reforms of regulations that affect the functioning of the government, especially corporate activities. It is worrisome that there are negative discussions about the deregulation that has been promoted by the government before and after the Sewol ferry disaster. Some regulations are, of course, necessary and well-intentioned. However, there are other regulations that discourage corporate activities, make companies avoid domestic investments and push them to invest abroad, resulting in fewer jobs for Korean workers.

Furthermore, good regulations that are strengthened to the level of developed nations will contribute to reducing Korea’s insensitivity to a culture of safety, especially in businesses. Some may blame Korea for not having a culture of safety. But that culture, or social atmosphere, was created by the laws and systems that condone illegalities with light punishment, which have been maintained for a long time. If a company that violates laws related to the safety of its workers, customers or even passersby cannot avoid punitive damages that would bring down the business, the corporate sector will be guaranteed to start taking safety seriously. If the law calls for punitive penalties that can ruin a business, no company would dare to hire an unqualified captain to be responsible for the safety of hundreds of passengers to cut costs, as the operator of the Sewol did.

Of course, schools and other parts of our society have been slack with safety education, and safety sensitivity has been neglected nationwide. Also, the government has not made much investment in safety procedures. Safety training exercises should be promoted under the greater goal of the national rebuilding.

The government and politicians need to lead such changes, reforms and the so-called national rebuilding, and all citizens should join those efforts. We need the wisdom to turn a national disaster into a chance to upgrade the country into a leading developed country with dignity.

*The author, a former deputy prime minister for the economy and finance minister, is an adviser to the JoongAng Ilbo.