Land owned by foreigners up 0.7%

Land owned by foreigners up 0.7% 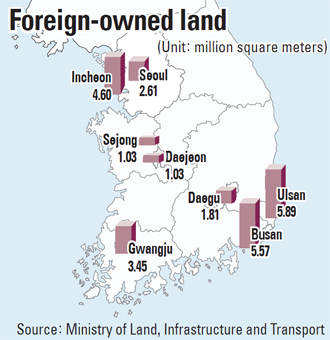 Foreigners owned more than 220 million square meters (54,000 acres) of land across the nation as of the first quarter of this year, up about 0.7 percent from the final quarter of last year.

According to the Ministry of Land, Infrastructure and Transport yesterday, foreign ownership of Korean land increased 1.51 million square meters in the first three months of the year, largely due to the government’s efforts to attract more foreign investment.

Land possessed by foreigners accounts for 0.2 percent of the country’s total landmass, the ministry said. The land was valued at about 33.4 trillion won.

Koreans who only hold foreign passports made up the largest share of foreign landowners. They owned 126 million square meters, or 55 percent.

The ministry recorded a jump in buying by Chinese investors. They purchased 780,000 square meters more land in the first quarter compared to the previous quarter, mostly in Jeju.

“As deregulation moves accelerate, especially in attracting foreign investment, foreign landlords in the country are likely to increase rapidly,” said a ministry official. “The ministry will start keeping track of purchases of land and uses by foreigners more closely as the number of foreign investors in real estate rises.”