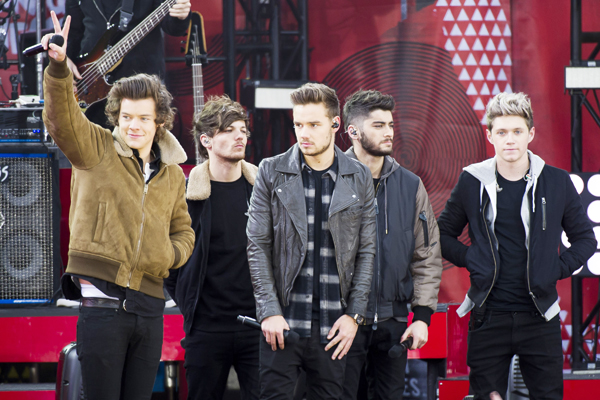 This Nov. 26, 2013, file photo shows One Direction members, from left, Harry Styles, Louis Tomlinson, Liam Payne, Zayn Malik and Niall Horan in New York. A representative for One Direction says the band’s lawyers are dealing with a video showing two band members smoking what the singers referred to as an illegal substance. [AP/NEWSIS]

NEW YORK - A representative for One Direction says the band’s lawyers are dealing with a video showing two band members smoking what the singers referred to as an “illegal substance.”

British tabloid The Daily Mail posted the clip Tuesday of Zayn Malik smoking and speaking with Louis Tomlinson, who is filming the video.

“This matter is in the hands of our lawyers,” their publicist said Wednesday.

In the video, 22-year-old Tomlinson says “joint lit, happy days,” and asks his bandmate, “What do you think, Zayn, about that kind of content?” The 21-year-old Malik responds: “Very controversial.”

Tomlinson says they are in Peru. The British boy band, on an international tour, stopped in Lima, Peru, last month.

The video led some angry fans to post photos of them burning One Direction’s concert tickets. The platinum-selling group has achieved worldwide success since debuting in 2011, thanks to a feverish fan base made up of young girls. Their hits include “What Makes You Beautiful,” “Best Song Ever” and “Story of My Life.”

The group was set to perform Wednesday night in Sunderland, United Kingdom.

Tomlinson and Malik reference drugs in a number of ways in the five-minute clip. Tomlinson says “Mary J” is part of Malik’s warm-up routine before a show, appearing to reference Mary Jane, another word for marijuana. The singers also acknowledge police officers riding on bikes next to their car, where they are in the back seat.

“He’s thinking, ‘I’m sure I can smell an illegal substance in there,’” Tomlinson says. “And he’s hit the nail on the head.”

When asked about the video, singer-actress Demi Lovato - who has struggled with an eating disorder, cutting and other issues - wouldn’t comment directly but said it’s difficult trying to live up to expectations from fans and the public.

“It’s hard because there is a lot of pressure on you as an artist. ... Sometimes I feel like the more I try to please other people, the less I’m myself,” the 21-year-old said Wednesday. “What I’ve learned over the past few years is to just be who I am and if people don’t like it, [expletive] it. This is who I am.”