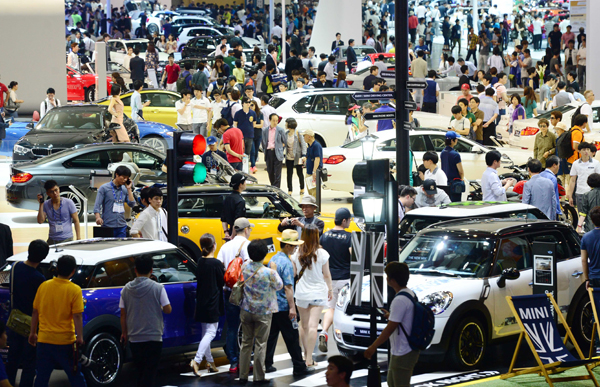 Visitors check out the wheels yesterday at the Busan International Motor Show, which runs through June 8 at Bexco. [NEWSIS]

BUSAN - Korea’s second-largest city is hoping to wake up the regional economy with the seventh Busan International Motor Show that organizers expect will draw more than 1.1 million visitors.

The biennial event got under way yesterday at Bexco and will be open from 10 a.m. to 6 p.m. daily through June 8.

According to organizers, 211 vehicles are on display, the first time the motor show has had more than 200 since it began in 2001. In addition, its display zone is the largest ever at 44,652 square meters (11 acres), which is 49 percent bigger than 2012 when the motor show set its attendance record of 1.1 million.

“I think the Busan International Motor Show is positioning itself as Korea’s renowned car show,” said Ford Korea CEO Jung Jae-hee, who is chairman of the Korea Automobile Importers and Distributors Association. “Busan is also a big market for imported cars, and we hope the event will continue to become even more successful.”

The Busan motor show was originally intended to boost the Asian auto industry. This year, the eighth Global TransporTech, a trade show for the transport industry organized by the Korea Trade-Investment Promotion Agency, is being held in conjunction with the auto show at Bexco. More than 300 buyers from 60 countries are expected to attend.

This year, Busan also wants the motor show to shake up the broader regional economy, which has been affected by the Sewol ferry tragedy. Officials hope that restaurants, hotels and travel-related businesses will benefit from the show.

To draw in more visitors, organizers are offering promotions and programs. Each day during the show, a car will be given away to a visitor through a random draw. There also is an oil-free driving program, where visitors can test drive electric cars and fuel-cell vehicles.

Korea Railroad and Air Busan, Korea’s No. 3 low-cost carrier based in Busan, have rolled out special discount packages for visitors to the motor show.

Yet the memory of the Sewol ferry disaster is being felt. Exhibitors say they are using fewer female models and asking them to wear more modest outfits, and some staff members will wear yellow ribbons.

“The Busan International Motor Show must have its own identity to successfully position itself against large auto shows in China and Japan, where most automakers release their fancy new cars,” said Kim Pil-soo, an automotive engineering professor at Daelim University College. “It must offer a good reason for automakers to participate because compared to Seoul, Busan is still a small market.”