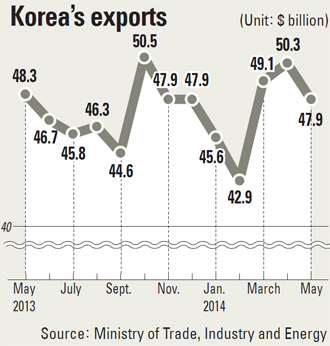 The reduction was attributed to fewer working because of two national holidays at the beginning of the month, with many businesses giving their workers an additional day off.

Shrinking shipments to China and Asean countries, Korea’s two largest export markets, was another reason for the drop.

The Ministry of Trade, Industry and Energy predicted exports will continue to be strong as the economies of the United States and European Union countries - Korea’s third and fourth largest export markets - recover.

“The government plans a series of solutions to expand exports to China, taking note of changes in the country’s slower import market,” the ministry wrote in a statement released yesterday.

Exports to China in May shrank 9.4 percent compared to the same month last year, and exports to Asean countries shrank 2 percent.

While export growth to the United States and European Union in May slowed compared to April, it was still enough to offset the declines in Asia

Ships, personal computers and petroleum products showed the largest year-on-year increases. Value-added drilling and production vessels valued at $3.6 billion were reported, an increase of 30 percent compared to May last year.

Korean holidays in May reduced typical auto production by two days, and resulted in a 0.5 percent decline in auto exports to $4.1 billion.

Exports of LCD displays were $2.1 billion, 6 percent less than in May 2013, due to price competition with other manufacturers.

Overseas sales of Korean smartphones shrank 10 percent to $2.4 billion, largely due to an increasing inventory in Chinese and European markets.

Consumer products, in particular foreign cars (up 51.8 percent), accounted for the biggest share of the increase, offsetting a decline in raw materials.