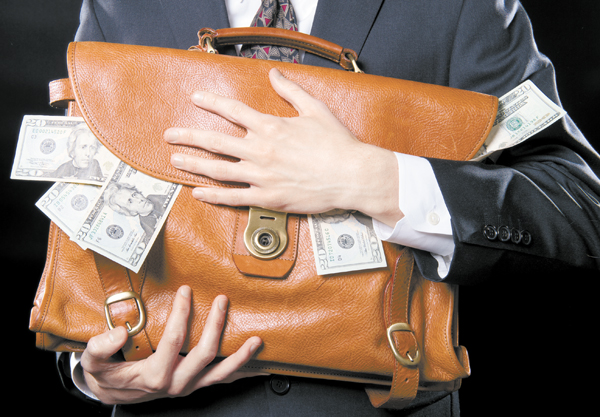 The nation’s financial authority has said it will take measures to clean up the mess made by major financial institutions after a recent string of unethical incidents by employees of major banks.

The investigation is likely to hurt the bank’s public image further amid the ongoing internal conflict between the bank’s CEO and KB Financial Group’s chairman over the replacement of the bank’s IT network.

“The latest incident involving a KB Kookmin Bank employee again may lead to a special probe into the bank,” said an FSS official. 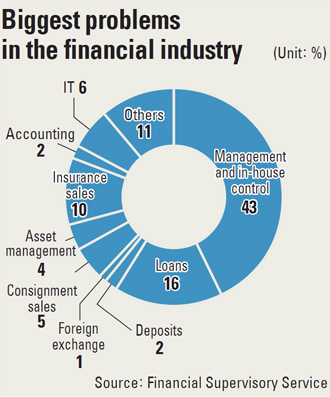 According to the FSS, a bank employee allegedly colluded with the owner of a franchise business and opened an account under a false name in order to help the owner embezzle hundreds of millions of won. They created the account under the name of the owner’s colleague, who co-directs the company, the authority said.

The bank employee is married to one of the owners, according to the authority. The incident was reported to the FSS by the owner’s colleague. The colleague requested an investigation into KB Kookmin Bank to find out how the bank account was illegally created.

The financial authority decided to increase its checks on local financial companies in order to tighten their ethical codes further after a series of incidents at major banks.

The bank’s Tokyo branch was under scrutiny by the FSS as it was found issuing illegal loans, faking documents and falsely reporting procedures to headquarters in Seoul.

Earlier this year, a branch employee stole a customer’s deposits over a one-month period, amounting to 100 million won, and used the money for gambling. The bank’s headquarters discovered the scheme and reported it to the FSS. The employee paid back the money later.

A spokesman at KB Kookmin Bank said the employee who made the fake account no longer works at the company, so the investigation could be difficult.

“It is not an embezzlement case by the bank employee now,” said Yoo Jung-yoon, the public relations head of the bank. “The employee made the false-name account in 2009, and then retired voluntarily in 2010.”

The spokesman said the complaint to the FSS would not lead to a special probe.

However, KB Kookmin Bank does not want to be in the spotlight again even for a minor complaint. In less than six months since the top executives and employees of KB Kookmin Bank pledged to uphold a new ethics code, the financial institution has suffered heavy blows to its public image including leaks of customers’ private information and alleged embezzlement by several employees.

The new ethics code focuses on establishing a corporate culture that prioritizes customers’ interests and gaining their trust by following rules.

In his New Year’s speech, the bank’s president, Lee Kun-ho, stressed the need to regain customers’ trust, which was damaged by alleged activities, including embezzlement and money laundering at its Tokyo branch that led to the suicide of one employee last year.

“We have caused the public to be concerned because of last year’s financial accident,” Lee said during his speech on Jan. 2. “It is something that should have never happened at a bank where trust is essential.

“Today, through our pledge for new ethical management, we will reflect on ourselves so that something like this will not happen again, and we promise to the public that we will be loyal to our fundamental role and strive for legitimate and ethical management.”

The issue of customer trust was also addressed by KB Financial Group Chairman Lim Young-rok when he took up the position in July last year. Lim mentioned it again in his New Year’s speech.

“We have to be a financial group that is trusted by our clients, the market and society,” Lim said when he stepped into the position last year. “A financial company is a company that lives on trust and without it, there is no future.”

He said that protecting trust by safely managing clients’ assets and information was essential.

In his New Year’s speech, the chairman made a similar remark that the financial group should not betray the trust of customers and the public, especially when it is facing one of the biggest challenges of recent years in falling profits.

He stressed the need to strengthen KB by expanding its customer base locally.

Some critics say that the absence of strong leadership is the likely cause of the recent ethical problems at the institution, although it is still the largest bank in the country in terms of deposit amounts.

According to a financial industry insider, parachute appointments of chiefs of financial institutions by the government have led to severe internal conflicts at those institutions, as seen in the latest case at KB Financial Group.

“Amid the mounting tension at the top management, there would be quite a lot of slack given to mid-level employees,” the insider said on condition of anonymity.

“Ethical disciplines at banks have been seriously loosened,” said a government official.

The financial authority has said it plans to tighten its supervision of banks, including provincial ones, and demand stronger ethics education.

Damage to the public’s trust caused by news of alleged embezzlement, bank employees tampering with loan documents and other illegal activities reached its peak when the personal information of credit card issuers’ clients’ was leaked.

Since then, banks have been trying to recover the faith of their clients.

Most recently, Hana Bank on Thursday said its top executives held their first meeting on reforming in-house control on May 22. The aim is to step up the ethical awareness of employees and to increase clients’ trust, according to the bank.

The bank also said it will set up a system that can detect and analyze irregularities in electronic financial transactions and a special center that will investigate potential damages caused by irregular transactions.

Other banks, such as Korea Exchange Bank (KEB) and Woori Bank, made similar moves in April.

On April 25, KEB created a task force to inspect illegal activities or irregularities at the bank and Woori pledged on April 24 to work on improving employees’ ethical standards.

“When the [public’s] trust is at its worst, bankers have to be faithful to fundamentals and ethics,” Woori Financial Group Chairman and Woori Bank President Lee Soon-woo said.

As part of their efforts, the banks said they are looking into irregular financial transactions made in bank accounts opened under an employee’s name.

Shinhan Bank and Woori have said they will launch an inspection of an employee’s bank account if they make a transaction of more than 10 million won.

KEB has said it will conduct an inspection on transactions that exceed 30 million won.