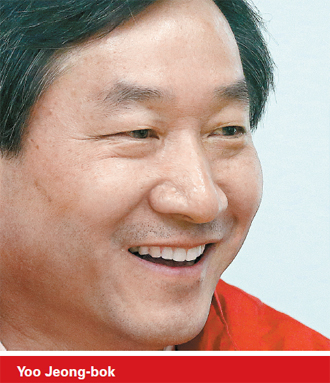 The campaign poster of Yoo Jeong-bok, the Saenuri Party candidate challenging Incheon Mayor Song Young-gil of the New Politics Alliance for Democracy, reads: “One of the most important relationships in my life is between President Park Geun-hye and me.”

During an interview with the JoongAng Ilbo on May 25, the president was the first person Yoo mentioned.

“The Asian Games in Incheon are right around the corner, but incompetent Mayor Song has never had a single meeting with the president for an inspection prior to the event,” said Yoo. “If I am elected, I will hold meetings with the president and receive additional financial and administrative support from the central government.”

Q. How do you assess the four-year term of Song as mayor?

A. Song made five pledges four years ago and none of them was kept. He promised to build an underwater tunnel from Incheon to Chungcheong, but he didn’t even review the plans. He also said he would reduce debt, but it is now 13 trillion won ($12.7 billion), up from 7 trillion won when he took office. Song shrank the budget for education from 800 billion won to 500 billion won. He deceived people with big lies. Plus, he has been stigmatized by corruption, as his chief secretary, who graduated high school with him, was sentenced to a seven-year prison term for receiving a huge amount in bribes.

What kind of Incheon are you going to make?

To fix the severe financial problems of the Incheon government, the mayor has to be an experienced person who understands its administrative structure. I have worked in the fields of local finance and administration for more than 20 years. I can draw support from the central government. One of my pledges is to extend the KTX line to Incheon by connecting the Incheon-Suwon railroad to the Seoul-Busan line. It will cost about 150 billion won, but it is possible because national railroad projects are supposed to be done by the central government. The same thing goes with moving the military base from downtown, and I already have talked to high officials of the military. Song criticizes me, but I am only using my capacity to communicate with the central government and facilitate cooperation.

How did the relationship between you and the president start?

In the 17th general election in 2004, the Grand National Party [predecessor of the Saenuri Party] was hit by a backlash after attempting to impeach President Roh Moo-hyun. The Grand National Party won only 61 seats in the National Assembly in Seoul and Gyeonggi, and Representative Han Sun-kyo and I were the only newly elected lawmakers. I later was appointed as her chief secretary and have stayed close to her ever since. If you want to know why I was trusted, she would be the one who could answer. If anything, I have never done things for personal gain in the 10 years of my political career. I assume she recognizes my sincerity. Everyone is happy that I am close to the president, except maybe just one [Song]. Being close to the president is never a flaw.

Aren’t you worried about using your relationship with the president?

Of course I am. Whether or not I’m elected might influence the president’s operation of the government in both good and bad ways. So I feel a great responsibility and I will try my best to win the race.

Your first act of the election campaign was paying respects at the joint memorial altar for the Sewol ferry victims.

The disaster was a national misfortune. I felt a heavy ethical responsibility and was sorry for people. I began my campaign by visiting the memorial altar to make a promise to myself that I will prevent those kinds of accidents.

Your rival finds fault with you for having served as the first safety and public administration minister.

I made every effort to establish safety policies. [The Sewol ferry accident] tears at my heart and I have no excuse for that. I feel regretful for not making more solid policies. As a grown-up of the time, I feel sorry and shameful to the later generations.

But mentioning the ferry disaster and blaming the government repeatedly in the race is not desirable. Three years ago, during Mayor Song’s term, the Ohanama, another ferry of the Cheonghaejin Marine Company, drifted on the sea for five hours with 400 passengers, including high school students. And the captain at that time was Lee Jun-seok, who was the captain of the Sewol, but authorities did not take any measures then. Song even gave a logistics award to the Cheonghaejin Marine Company. The Incheon city government revoked the award after the authority was suspected of having been lobbied. And it doesn’t seem right to use the Sewol ferry disaster in an election campaign.

You promised to organize a team to improve students’ performance.

College Scholastic Ability Test scores of Incheon students are the lowest in the country. The education budget didn’t even reach 1 trillion won, but Song cut it to 500 billion won. There are independent education authorities, but the mayor is obliged to support them and cooperate with them.

How are you going to attract more companies to locate in the Incheon Free Economic Zone in Songdo?

It is partly due to economic recession, but it is up to the mayor. I have work experience in that field, and I am sure that I will attract many investors. During the campaign, I have talked to very important investors in the United States and China.