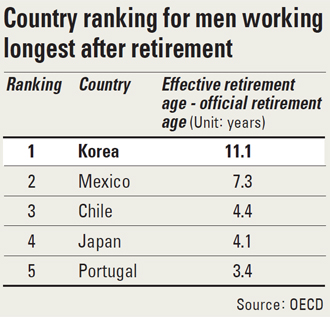 Koreans are known for their long working hours, and recent data from the Organization for Economic Cooperation and Development shows that the custom continues even after they retire.

The OECD said that among workers in advanced countries, Korean men work for the longest period after retirement.

Korea’s official retirement age is 60, but Korean men on average work another 11.1 years more before they effectively retire.

French men and women had longest post-effective retirement period, 27.4 years for women and 22.6 years for men.

A relatively weak pension infrastructure was a factor in Koreans working after retirement. There is also a higher amount of self-employed people in Korea, who tend to work longer. About 29 percent of the people with jobs in Korea were self-employed in 2010, as opposed to the OECD average of 15.9 percent.