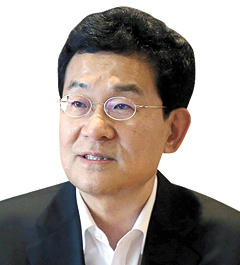 Koh Seung-duk continued to insist that a damaging character assessment by his own daughter was a political conspiracy designed to scupper his bid to be elected superintendent of the Seoul education office in tomorrow’s election.

On Saturday, Koh’s oldest daughter from his first marriage wrote an open letter “to the citizens of Seoul” on her Facebook page, saying that Koh was not qualified for the position because he was so negligent in taking care of his own children.

Koh says there is collusion between relatives of his first wife and the campaign team of challenger Moon Yong-lin, who is running for re-election.

“Only one hour before my daughter wrote the letter, Park Sung-bin called Moon Yong-lin and told him his niece would soon upload the post,” said Koh in an exclusive interview with the JoongAng Ilbo yesterday. Park Sung-bin is Koh’s former brother-in-law.

“It is possible that Moon, who lagged in third place in the polls, asked Sung-bin to help his campaign [by using my daughter],” said the estranged father. He claimed Moon and Park’s families have been close for a long time.

Koh and Moon, both perceived as conservatives, are running neck and neck for superintendent of the Seoul education office. Koh is a former lawmaker from the Saenuri Party.

The media hadn’t shown much interest in the race until the intervention of the daughter Koh Hee-kyung or Candy Koh.

In a stinging criticism of her biological father, who divorced his first wife in 2002 after years of estrangement, Hee-kyung said her father “never partook in the education of his own children, mentally or financially.”

Taken aback by the unexpected turn of events, Koh accused the Moon camp and relatives of his first wife of engineering a smear campaign against him. His first wife Park Yoo-ah is the daughter of Park Tae-joon, the legendary figure credited with building up Posco, the country’s largest steelmaker.

During the interview yesterday, Koh denied his daughter’s claim that he never contacted his children after they moved to the United States in 1998.

“I always felt sorry for my children,” said Koh with tears in his eyes. “But I felt nothing unusual just a few days ago in a chat with my daughter on Kakao messenger. I even ran some errands for her by going to a bank a few months ago when she came to Korea.

“How could parents not love their own children?” he asked.

In her Facebook posting, Hee-kyung said her father never contacted her or her younger brother “despite the existence of a telephone and Internet” since her mother took them to the U.S. when she was 11 years old. The two divorced in 2002.

“I think she has the mistaken idea that her father does not love her,” Koh said in the interview. “To fix that, I have chosen not to adopt a child [in his second marriage].”

The former judge remarried a former newspaper staff writer in 2004. Koh said the couple has tried to have a child for 10 years but in vain.

“I could not adopt a child because of the objections of my daughter. I am so sorry for my wife now.”

Discussing his failed first marriage, Koh said his two children were virtually taken away from him and he was left empty-handed. A 3 billion won ($292.8 million) apartment in Seoul went to his first wife in a divorce settlement.

“It was not an easy thing to live as a son-in-law of a chaebol family for a man coming from an ordinary countryside family,” said Koh.

Koh’s opponent strongly denied being involved in any smear campaign and said he will sue Koh for defamation. “I didn’t even know that Koh was a son-in-law of Park Tae-joon before the campaign,” said Moon in a radio interview with SBS yesterday.