Probe by reps is politicized from the very start

Probe by reps is politicized from the very start 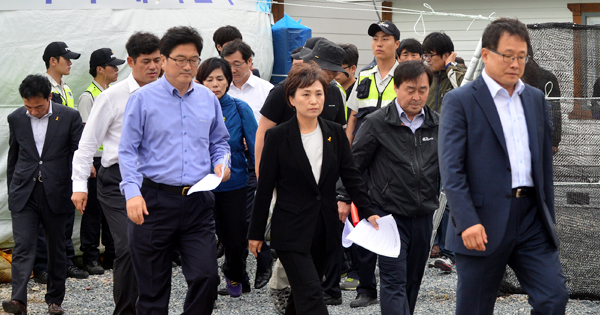 Opposition party lawmakers walk out of a meeting with family members of the missing passengers from the Sewol in Paengmok Harbor in Jindo, South Jeolla, yesterday. The lawmakers are conducting a parliamentary investigation into the disaster. [NEWSIS]

A legislative investigation into the Sewol ferry tragedy got off to a shaky start yesterday as only half the National Assembly members on a special committee visited the site of the shipwreck, while members from the ruling Saenuri Party stayed behind, supposedly out of respect to the victims’ families.

The opposition said the ruling party members were trying to avoid bad publicity ahead of the local elections tomorrow.

The visit to Paengmok Harbor, in Jindo, South Jeolla, was designed to allow the special parliamentary committee of 18 lawmakers to meet with victims’ relatives and encourage rescuers and volunteers at the scene.

The three-month investigation slated to end Aug. 30 is looking into the causes of the country’s worst marine accident, in which 288 passengers were found dead and 16 remain unaccounted for.

In a press briefing at the National Assembly yesterday, Saenuri Party lawmaker Shim Jae-chul, the chairman of the committee, said that he received a call around midnight the day before informing him that the victims’ relatives wanted the committee to postpone the visit.

“The families asked us to choose another date because the relatives who were supposed to participate in the meeting were away,” Shim said.

Shim said it was too late at night for him to inform committee members from the main opposition New Politics Alliance for Democracy, which is why he waited until the next morning to personally inform them at Yongsan Station, the departure point for Jindo.

“Some opposition lawmakers insisted on going anyway after coming all the way to Yongsan Station,” said Shim.

The NPAD fired back yesterday morning with a press release criticizing the Saenuri Party’s “unilateral” move to postpone the visit “without any discussion with the opposition party.” It accused the party of trying to minimize any publicity about the Sewol ferry disaster ahead of the June 4 local elections.

“It’s preposterous that the party would create a lie that would get revealed in an hour,” he added.

At 1 p.m. yesterday, NPAD members of the committee arrived at the gymnasium in Jindo where relatives of missing passengers are staying. They talked with the family members, listened to the rescue team’s progress report and delivered a resolution address.

Opposition lawmakers said they will arrange a schedule with the Saenuri Party to re-visit Jindo on Thursday.