Less than a month after Samsung SDS announced plans to go public this year, the de facto holding company of the country’s largest conglomerate released its initial public offering plan yesterday with a goal of completing the process by the first quarter of 2015.

Analysts see the move as a way to help the family-run conglomerate prepare for a smooth transition of leadership to Samsung Electronics Chairman Lee Kun-hee’s three children.

Its board of directors in a meeting yesterday resolved to seek an IPO “to secure the competitiveness of business divisions that were reorganized last year” at an early phase so the company can “leap forward and become a global fashion and service company,” said Samsung Everland President Yoon Ju-hwa.

“With the IPO, Samsung Everland plans to strengthen management transparency based on global standards and improve international creditworthiness by being active in investor relations activities,” the company said in a statement yesterday.

Samsung Everland plans to select managers for the IPO this month and decide on a time frame and how it will offer shares for public subscription.

Analysts, however, see yesterday’s announcement as in line with the conglomerate’s overall push to make Samsung Everland a control tower and officially turn it into a holding company.

And at the helm would be Lee’s three children.

For years, there have been speculations that Samsung planned to make Samsung Everland a holding company to smooth the transition from Chairman Lee to his children by securing stronger capital. Samsung denied it.

Analysts note that by listing Samsung Everland, the Lee family will be able to use shares as collateral to secure cash to pay an inheritance tax bill that industry insiders say could amount to more than 5 trillion won ($4.9 billion). 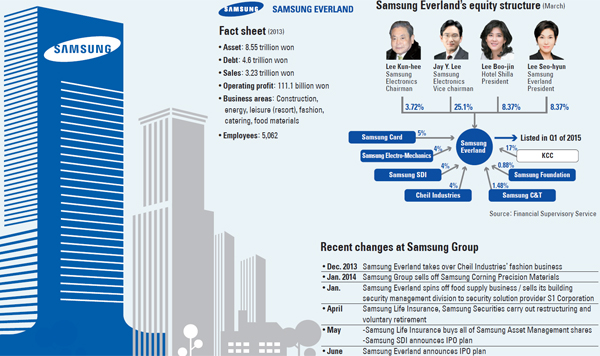 “The listing of Samsung Everland can be interpreted as a part of the inheritance process,” said Kim Ji-woong, a market analyst at E*Trade Financial Corporation. “Samsung Group seems to have decided to list Samsung Everland to secure funds, as the amount of inheritance tax is huge and it is not enough to cover it just by listing Samsung SDS on the local stock market.”

Kim also added that when Samsung Everland is listed, it will officially become the holding company of Samsung Group with Lee’s three children being in control.

With the listing of Samsung Everland, Lee’s family’s shares are expected to have a market value of more than 2 trillion won. Add in the gains from listing Samsung SDS, an IT solutions affiliate, and the owner family will be able to raise enough to pay the hefty inheritance tax.

There have been major changes and reorganizations of some affiliates in the second half of last year.

Earlier last year, there were rumors that Cheil Industries was trying to reinvent it self as a new material developer, as smart products including smartphones have surfaced as a lucrative industry.

A steady supply of new materials that could be used in Samsung Galaxy smartphones and other smart devices is expected to not only save Samsung Electronics’ money in manufacturing costs, but provide a steady income for Cheil Industries.

Analysts envision a scenario where - with the more than 5 trillion won gain from listing Samsung Everland and Samsung SDS - Jay Y. Lee will enhance his leadership of Samsung Group by buying shares of other affiliates, such as Samsung Electronics, or merging them with Samsung Everland.

“As Samsung Everland is at the top of Samsung Group’s management control and owned by the children of Lee Kun-hee, Jay Y. Lee and his sisters will maximize Samsung Everland’s corporate value to increase their dominance of other key affiliates such as Samsung Electronics and Samsung C&T,” said Park Joong-seon, a research fellow at Kiwoom Securities.

In the case of Samsung Electronics, even though it is the core business of the group, Chairman Lee and affiliates in which shares are held by his family own only 17.66 percent of shares.

“Since Jay Y. Lee, the largest shareholder of Samsung Everland, holds 25.1 percent and his related parties, such as his sisters Lee Boo-jin and Lee Seo-hyun, each own 8.37 percent of shares in Everland, Lee will be able to defend management control of other affiliates in the cross-shareholding chain,” said an analyst at a local securities firm.

“When combining Lee’s related parties’ 45.56 percent shares in Everland, 15.22 percent of treasury stocks and KCC’s 17 percent of [friendly] shares, Lee will have a total of 77.78 percent of shares,” said Park of Kiwoom Securities.

“Lee will then likely sell Samsung affiliates’ 18.48 percent shares in Samsung Everland in the market to raise funds, which will still leave enough shares to have management control and use the funds to increase [his shares in] the treasury stocks of Samsung SDI, Samsung C&T and Samsung Card in the future,” Park said.

Meanwhile, the management division between Jay Y. Lee and his sisters also is a pressing question.

Market observers predict Samsung will accelerate the separation of Samsung affiliates among the three children of Chairman Lee, while Samsung Everland will be at top as the holding company, controlling group affiliates including Samsung Electronics.

“Samsung will complete the succession of the next generation and separation of affiliates after increasing the owner family’s management control over key affiliates through the holding company system,” said a market analyst who declined to be identified.

Samsung Group, however, refused to admit that the listing of Samsung Everland and Samsung SDS has anything to do with Chairman Lee’s inheritance.

“The listings of affiliates were according to their decisions, and we cannot say that they are part of any inheritance process,” said Lee Kyung-hwa, spokesman for Samsung Group. “As we mentioned in our press release, Samsung Everland decided to go public to expand the business and grow as a global fashion and service company.”

Samsung Everland said in its statement that it plans to enhance each of the businesses - fashion, resorts, construction and catering - through the IPO. According to the Financial Supervisory Service, Samsung Everland’s sales were 3.23 trillion won and operating profit 111.1 billion won last year. It has more than 5,000 employees.

For its fashion business, it plans to pave the way for its fast fashion brand 8 Seconds to become a top global brand through supply chain investment, according to the company. It also plans to strengthen new businesses in sports and outdoor wear.

As for its resort and leisure business, the company said it will invest more on expanding facilities at Everland, an amusement park in Yongin, Gyeonggi.

In addition, the listing will allow Samsung Biologics to secure new biotechnology, the company said. Samsung Everland is a major stakeholder in Biologics with 44.5 percent of shares.

With the puchase Samsung Electronics now owns 25.16 percent of Samsung SDI’s and 8.62 percent of Cheil Industries.