Pigging out on pork not an option for many

Pigging out on pork not an option for many

A man shops for beef at a major retail store in Seoul while the pork section remains void of customers due to the high price of pork. [NEWSIS]

On Monday in a conference room in Seocho-dong, southern Seoul, some 10 or so representatives of the Korea Pork Producers Association gathered to discuss the rising price of pork that has been hurting the industry.

This month, the price of the popular Korean meat staple pork belly was only 5 percent cheaper than beef imported from Australia.

“Just because pork prices are going up, it doesn’t necessarily benefit the farms,” said Lee Byung-kyu, chairman of the Korea Pork Producers Association. “Consumers are hesitant to buy pork because it is expensive. My biggest concern is the instability in supply and demand.”

In its hourlong meeting, the group said it would announce a plan to stabilize the rising price by Friday.

Increasing pork prices have already started to take their toll on the industry and on consumers.

Housewife Kim Yeo-hwang, 57, on Monday paid her usual visit to a supermarket near her home. But she was extremely surprised at how little meat she got when she asked for pork belly worth 10,000 won ($9.83).

“This is too little,” Kim complained to the employee over the counter.

“We’re actually afraid of selling it because the meat price has gone up recently,” the employee told her.

“Normally 10,000 won of pork belly was enough for dinner for our family of four,” Kim said. “From now on, it will be really difficult for us to afford pork belly.”

Major retailers have been trying to encourage pork belly sales by discounting the product. E-Mart last month sold pork belly for 33 percent below its retail price. As a result, sales were six times higher. When E-Mart held the same sale this time last year, the store’s pork belly sales only doubled that of a normal day. 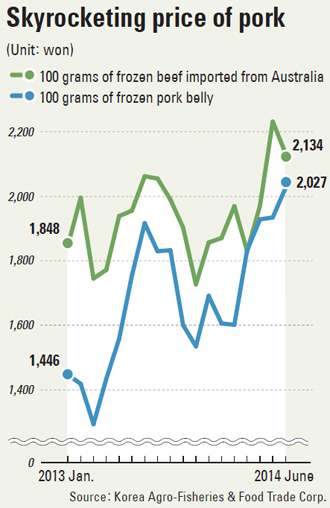 Homeplus and Lotte Mart are jumping on the bandwagon with discounts of 20 percent or more. But industry insiders say the rise in sales will only last while the discount is on and will drop to its previous level when the event is over.

“This is the first time since 2011, when there was a foot-and-mouth disease outbreak, that pork prices have exceeded 2,000 won per 100 grams before the vacation season starts,” said an official in the retail industry. “Consumers have already hit the psychological barrier.”

“Normally we would be preparing events that would promote sales of pork for summer vacation, but we can’t proceed with it because the supply from farms has become unstable due to the rising prices,” said Moon Joo-seok, an official at E-Mart.

Several factors have led to the price increase, including higher temperatures and the unexpected avian flu earlier this year.

As the summer heat has hit the Korean Peninsula much earlier than previous years, many people have started taking outdoor trips, resulting in higher demand for pork belly. And more people have opted for pork as an alternative to poultry after the avian flu outbreak, driving up prices. The retail industry has said that a shrinking number of female pigs has added to the reduced supplies.

The pork industry is worried that the recent price hike is just the beginning of what could be a long-term price hike.

According to a livestock retail information center under the Korea Institute for Animal Products Quality Evaluation, as of Tuesday, 1 kilogram of pork retailed for 5,583 won. The price is a record high for this year, up from 4,457 won recorded in March. In the past two months, the value of pork has shot up 25 percent.

Pork prices usually do not start to increase until May when the weather becomes mild and people start spending time outdoors, where pork belly is the favored grill meat.

In a normal year, the price will peak during summer vacation season between late July and mid-August and then will fall again.

“Since pork sales are more affected by the vacation season [compared with other meat], prices will surely surge,” said Ryu Sang-gwon, an official at Lotte Mart.

With the World Cup opening in Brazil later this week, the industry said it would be impossible to keep prices down.

For the first time, the price of imported frozen pork belly exceeded 1,000 won for 100 grams.

This was largely due to the spread of porcine epidemic diarrhea virus in the United States, which killed off many pigs. Pork imported from the United States accounts for the largest amount of imported pork in Korea at nearly 48 percent. However, the virus has reduced the amount of U.S. pork imported to Korea by 10 percent.

As a result, Lotte Food has raised the price of ham - one of the most popular pork products to take camping - by 10 percent.

The Korea Rural Economic Institute has projected that prices of pork will continue to go up until July and will likely begin to fall gradually in August.

Production of pork between June and November is expected to be 5.3 percent lower than the same period last year. However, summer vacation will end in August and the most celebrated national holiday Chuseok comes a few days earlier than last year, which will help ease prices, the institute said. It noted that usually, pork prices start their seasonal drop around the Chuseok holiday and hit a low point in October before climbing again in November and December when many families start making kimchi. In many Korean homes during the winter kimchi-making season, a side dish of boiled pork is eaten with the spicy fermented cabbage.

But retail insiders are skeptical of whether the price of pork would begin its usual decent in August.