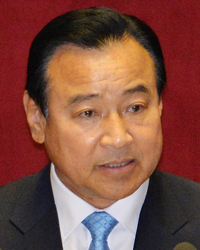 In a National Assembly address delivered before lawmakers yesterday, Saenuri Party floor leader Lee Wan-koo proposed the creation of a special parliamentary committee dedicated to reforming the country after ill practices and corruption were laid bare in the wake of the Sewol sinking.

“To bring about a comprehensive reform for the Republic of Korea, we [as lawmakers] should draw up a comprehensible reformist plan,” said the South Chungcheong governor-turned-lawmaker.

Lee proposed setting up three branches under a special reformist committee. Each will be dedicated to restructuring management and operation of the National Assembly and government, as well as improving the livelihood of the people.

In the speech, the floor leader described the local election outcome as a final warning to the ruling party from the public. According to Lee, the public is telling the Saenuri to eliminate deeply rooted corrupt practices in the country, such as collusion between government officials and private businesses, in which favors are given in exchange for bribes. Lee added that the public also cautioned the opposition New Politics Alliance for Democracy for its attempt to politicize the tragedy to gain victory in the June 4 elections.

For the Assembly’s extraordinary session in June, the ruling-party politician urged lawmakers across the aisle to pass the so-called Kim Young-ran bill, an anti-corruption law that would enable authorities to punish government officials for taking bribes worth 1 million won ($984) or more, regardless of the circumstance. He also supported the so-called Yoo Byung-eun bill, which will allow the government to go after assets obtained illegally, and called for the passage of a revision to the Public Servants’ Ethics Law, which will strengthen punishment for officials who take the bribes.

“All these four bills must be passed through the Assembly during the ongoing extraordinary session to prevent a calamity like the Sewol sinking from ever happening again to Korea,” said Lee.

The 64-year-old lawmaker urged his colleagues to pass a revision to the controversial National Assembly Advancement Act, which forbids a political party from unilaterally sending a bill to be voted on during the plenary session.

Bills require approval from three-fifths of lawmakers under the advancement act introduced in 2012 to prevent brawling inside the Assembly. A revision championed by the Saenuri seeks to label pending bills undisputed by the two parties as “green light bills.” The Saenuri wants to fast track these bills for a vote without needing consent from the majority of lawmakers.